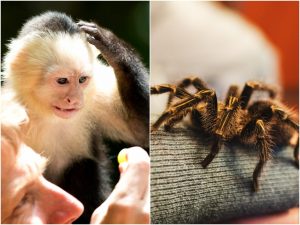 Service animals are also different. They are highly trained to provide assistance for owners who might be physically or visually impaired.

In recent years, there’s been a boom in emotional support animal popularity. Many people have attempted to travel with unusual companions, and in 2016, ABC News reported that passengers were stunned when a woman with PTSD brought her emotional support duck on her flight.

Debbie Garcia, an education director at Gentle Carousel Miniature Therapy Horses, said she gets a similar response when people see her animals. “When an elevator door opens in a hospital and tiny horses walk out it is unexpected and magical. People do not expect to see a horse indoors,” she said.

Take a look at all the animals that you might not have imagined could work in therapy or emotional support roles.

Garcia told Insider that not all miniature horses can be therapy animals.

“Most miniature horses in our program are from multiple generations of therapy horses,” she said. “Unlike dogs, horses are herd animals/flight animals so we look for outgoing, fearless personalities that like to be center of attention. We then spend time with them (with their moms) from the day they are born, exposing them to new things everyday like wheelchairs and different walking surfaces.”

Horses from Gentle Carousel, which is based in Ocala, Florida, visit adults and children in hospital and hospice care, among other locations.

“Our therapy horse Magic has a very special relationship with children in hospital care,” Garcia said. “One little girl who had a heart transplant and then leukemia said Magic made her face hurt from smiling so much.”

LiLou the Pig, pictured below, became famous after appearing in airports as a therapy animal.

In 2016, LiLou became the world’s first airport therapy pig after traveling to San Francisco Airport (SFO). On LiLou’s website, it says, “Everyone we meet leaves with a smile and every day we hear that we have made someone’s day.”

Rats can also be therapy animals. Abby Chesnut owns a therapy rat and runs a blog called Healing Whiskers, where she shares information about their benefits.

Chesnut, who lives in Georgia, travels around the country with her therapy rat, Vincent, visiting children at schools. Vincent and Chesnut both underwent training to register him as a therapy animal. The test involved tasks like being around a dog, being passed around, taking a treat, and reacting to loud noises, Chesnut said on her site.

“Vincent has been reading with kids for a couple of months now and he has been a champ,” she wrote in a blog post. “He might get a little fidgety at first, but he quickly gets comfortable and listens to the kids read.”

Guinea pigs can also become therapy animals. Caring for them can provide psychological benefits to those with autism, according to Psychology Today.

Preparing food, cleaning the cage, and interaction can lead to improvements in social skills for children, including those with autism spectrum disorder.

Llamas are quieter and more stoic therapy animals than dogs. They can bend their necks down to nuzzle those in wheelchairs.

Niki Kuklenski, of JNK Llamas, based in Bellingham, Washington, told Insider, “Llamas are magical as therapy animals. The good ones are intuitive and interactive. Mine know the line and can tell who wants to kiss them. Llamas are better for some people as they are not as intense as a dog or other animals of that nature.”

Capuchin monkeys can be emotional support animals and can also assist people with mobility impairments.

In addition to their role as emotional support animals, monkeys can be trained to perform certain tasks, like the monkeys at Helping Hands Monkey Helpers in Boston, Massachusetts, which help people with mobility impairments. The monkeys are even taught how to turn on computers.

Snakes can be emotional support animals for those with allergies, since they do not produce dander.

According to Emotional Support Animal Co, “It is safe to bring snakes around people and let others touch and play with them without having to worry about causing somebody to cough or sneeze.”

They also say that since many snakes naturally squeeze things, it can be like a hug for someone in need.

Though some may be scared of tarantulas, they can be a low-maintenance support animal.

Contrary to popular belief, tarantulas have very low venom levels, and their bites do not pose a real threat to humans. Additionally, though not traditionally “furry,” tarantulas do have hair, so they provide similar comfort to mammalian emotional support animals. They can also survive on one cricket a week, making them low effort and cost.

The emotional support hedgehogs from Heavenly Hedgies offer security for their human companions.

According to the blog Heavenly Hedgies, “Hedgehogs often comfort their owners with cuddles, licks, and offer their paws or cuddly bellies for rubs. Their defenses completely drop if they are able to form a close connection with their hedgie parents. Sharp and fortified quills become soft and relaxed making themselves available for emotional therapy and mental support.”

According to Emotional Pet Support, “These creatures are small, friendly, quiet, social, personable, and litter-trained! They’re also incredibly easy to carry around with you and they don’t get stressed out with moving around all day and not being able to go outside much.”

ABC News reported that a woman (not pictured below) brought her emotional support duck on a plane in 2016.

Daniel Turducken Stinkerbutt, aka Daniel the Duck, is an emotional support animal for Carla Fitzgerald. After an accident in 2013, she began to experience PTSD and Daniel helped her. According to ABC News, Fitzgerald was “incredibly nervous” and said that “just leaving the house can be terrifying,” but Daniel’s “hugs and kisses” gave her “comfort and confidence.”

In 2018, Dexter the emotional support peacock was barred from a United Airlines flight due to his weight and size, according to the BBC.

Sadly, Dexter passed away recently. He belonged to Brooklyn-based artist Ventiko, who told Bedford and Bowery, that he “really changed my life in a positive way.”

Turtles, like snakes, are also low-maintenance emotional support animals and are hypoallergenic.

According to Reptiles Magazine, turtles make good emotional support animals because “caring for them and handling them gives patients a sense of accomplishment they are proud to share with their friends and family.”

Cynthia Zhou has an emotional support pigeon (not pictured) called Miu, who helps with her depression.

In an article for Pigeon Rescue, Zhou wrote, “They’re not popular birds for companionship, but I think it would surprise most people to know how affectionate, emotional, and even entertaining they can be.”

Arianna Preuss has an emotional support sugar glider, and though it can’t be registered as a service animal, it has been trained to help with her disability.

Preuss has a brain malformation and multiple mental health illnesses. Her sugar glider is trained to respond to her heart rate, mood, and breath. When she is having a panic attack, he is able to come out and give her a distraction. Caring for him helps take her mind off things.

Preuss told Insider why, for her, a sugar glider is better than another animal: “Dogs are very visible to people and so people ask if they can pet them or say that they’re not really doing anything, but [my sugar glider] can be in my shirt, so no one even knows that he’s working. He’s able to do his job without being distracted by the public, which I think really stands out from regular service animals.”

In Plymouth, Massachusetts, Laura Ceurvels won a court case to keep her daughter’s emotional support rooster, even though it was annoying her neighbors.

In 2018, Ceurvels told WATD that the rooster was for her daughter. “It’s very comforting for her if she’s right there with him then, or when she’s starts to feel like she’s getting anxious. That’s her method of taking care of her anxiety,” she said.