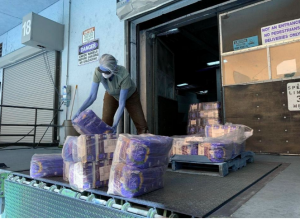 Service Dogs Inc. had scheduled its annual fundraiser The Mighty Texas Dog Walk to support the training of service dogs for March 28.

Purina already had shipped 18,000 pounds of dog food to the Austin American-Statesman, where the dog walk was supposed to take place. The dog food was designated to be given out to the walkers.

″ They told us to keep it and that they’ll bring more when we have the dog walk in October,” says Service Dogs Inc. Founder and President Sheri Soltes.

On Wednesday, Service Dogs Inc. loaded up the dog food and donated it to the Austin Pet Food Bank and the Austin Humane Society.

“They’ll make sure it goes to feed pet dogs and shelter dogs in need,” Soltes says.

The Austin Pet Food Bank collects food at Taurus Academy and Petco locations and the distributes dog food to local nonprofit organizations that serve humans, like Meals on Wheels Central Texas and LifeWorks, who might have pets.