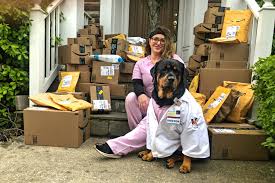 Last March, Caroline Benzel, a third-year medical student, began to notice the stress and discomfort her nurse friends were feeling from the pressures of the ongoing Covid-19 pandemic.

“[Personal protective equipment] can be really rough on the skin,” Benzel, 31, tells PEOPLE.

Benzel and her 3-year-old Rottweiler, Loki (who’s also a therapy dog) hatched a creative way to support their friends on the frontlines. She dressed up Loki in a lab coat and had the “Dogtor” deliver “hero healing kits” to nurses at their local University of Maryland Medical Center. The kits contain granola bars, moisturizers, lip balm, and other self-care items.

“It’s really cute to watch them sit on the floor, compare their goodies, and exchange different things,” Benzel says. “It really brightens their day.”

The duo’s efforts took off on social media, and now Benzel and Loki – who Benzel describes as a “sweet, playful” pup — are using their resulting fame to inspire others to build and deliver their own healing kits.

Volunteers in California, New Jersey, Minnesota, and five more states have raised close to $100,000 and delivered thousands of kits in recent months. “It’s been such a positive experience during a tough time,’ says Benzel, who has raised $70,000 and delivered nearly 4,500 kits to date.

Dogtor Loki has earned her fair share of the credit as well, winning several awards including The Animal Medical Center of New York’s 2020 Top Dog Honoree and the American Kennel Club’s Paw of Courage award.

“She’s taking the fame in stride,” Benzel jokes. When Loki’s not visiting hospitals, she likes to take long walks around Baltimore’s inner harbor or nibble on some homemade pumpkin dog treats.

Benzel and Loki plan to deliver their hero healing kits for as long as the pandemic continues. “It’s totally worth it, I would go without sleep to make sure that these kits go out because it’s I think it’s important to show our healthcare workers support,” Benzel says.

People throughout the country have reached out to Benzel about how to train their own dogs as therapy dogs so they, too, can spread a little joy in their communities.

She adds: “Rottweilers are considered ‘big and scary,’ but Loki shows that anyone can be kind and make a difference.”

For even more Stories to Make You Smile, pick up the latest issue of PEOPLE, on newsstands Friday.