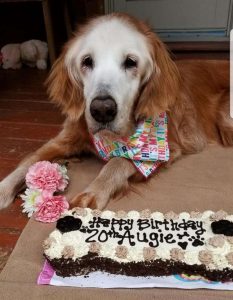 The Internet has fallen in love with a golden retriever whose owners believe her to be the oldest living dog in her breed.

Augie was adopted back in 2014, though recently garnered viral attention after a golden retriever interest group wished her a “Happy Birthday” on Facebook.

Hetterscheidt and his wife Jen first fostered Augie when she was 14 years old. At the time, Jen was the intake director at Golden Retriever Rescue of Southern Nevada.

Augie was first adopted at 7 years old through a Craigslist ad near Sioux City, Iowa. That owner had her birth certificate, though there was no pedigree or record of her original descent. With this information, along with a public list of the oldest living dogs, the Hetterscheidts think Augie could be the world’s oldest living golden.

“If you stuck Augie on that list she’d be number 19 and there were no other, older golden retrievers,” Hetterscheidt explained. “We don’t have proof, but we call it a preponderance of evidence.”

Hetterscheidts own three other golden retrievers — Belle, a 7-year-old certified therapy dog who visits children at St. Jude’s Hospital, Sherman, 10, who was born at Golden Retriever Rescue of Southern Nevada and Bruce, 10, whose previous owner, a friend, left the pup to the couple in their will.

On her birthday, Augie enjoyed a carrot cake made specially for dogs.