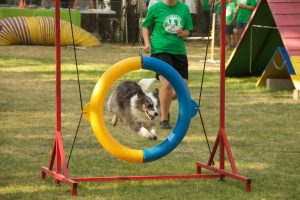 A new opportunity is opening up for the youth of Power County and their furry friends with the latest creation of a 4-H dog project, which will allow children to develop their relationship with their dogs while also providing exercise and training for their four-pawed companion.

The project, which was recently put together by Rockland local Rachael Flammer, is still in its early stages of development, but Flammer has experience working with a 4-H dog program and hopes to teach children and their dogs how to work together as a team.

“I would think that my goal here is to create a better education and understanding for how dogs learn and how we can teach them,” she said.

Flammer, who moved to Rockland from Amalga, Utah, last year, was the Cache County 4-H dog program co-director for six years and is currently the service dog program coordinator for her dog training business, K9’s Unleashed Academy LLC, in Logan.

Due to the move, Flammer shifted to online sessions with her business, which she co-owns with Jill Romo, but the move also opened up a door for her to start up a project in Power County.

“When I moved, I was like, well, I’m really interested in seeing if there’s something in this county because it’s a phenomenal program,” she said. “The 4-H program is incredible with what you can do and what you can create with these kids and their dogs.”

The project is open for youth anywhere between the ages of 8 and 18, and Flammer plans to introduce several events for students to teach their dogs.

These events include agility, which will have an obstacle course the dog must follow; showmanship, in which the child and their dog must memorize and perform certain patterns in front of a judge; competitive obedience; and rally, which is a combination of agility and obedience together without the obstacle.

Having a positive relationship with your dog also opens up lots of potential for healthy communication, she said.

“Sometimes you get more of an old-school mentality thinking, which is the ‘I win, you lose’ behavior, or there’s a dominance relationship of ‘I’m the alpha, you’re the submissive and you need to do what I say’ and you’re missing the relationship that way,” she said. “I think more than anything it’s to build understanding for how dogs learn and how much potential there is for what dogs can do and what dogs can learn in a relationship. They are an emotional being and you can have a connection both ways.”

Flammer also explained that the program would be good for children with dogs because it allows them to understand how even the little steps can be huge successes.

“The hardest part is to make sure that kids … understand what success looks like,” she said. “Because success can be teeny tiny for a dog, depending on the dog, or success can be like, ‘Look, I did the teeter in one day.’”

While the 4-H dog project is still in the early stages, Flammer is learning the technical details of becoming an official 4-H dog program in Power County so her members can compete in county and state levels.

Currently, those members participating will meet once a week at Flammer’s residence in Rockland, which has agility equipment and a sanded arena for children and their dogs to get started.

There is no deadline to join, and any child can start at any time as long as their dog is older than 10 weeks, she said.

“The 4-H program is just taking the kid’s side of things and going, ‘Let’s empower our kids to understand how to teach their dogs,’” Flammer said. “And then collectively we can make behaviors or skills happen together.”