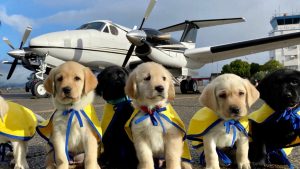 Seven puppies will be flying in style to Phoenix as part of a special service dog mission.

Volunteer pilot, Jeff Stewart, who is also the owner of Blue Star Gas, will be flying seven puppies to Phoenix on his personal plane. Three of the pups will stay in Phoenix while the other four will continue on to New Mexico.

Volunteer “puppy raisers” will provide care and training for the dogs until they are able to become assistance animals through Canine Companions for Independence.

The group provides free assistance dogs to people with disabilities.

Canine Companions says they generally rely on commercial airlines to help transport puppies across the country, but due to the coronavirus pandemic, that’s become difficult. They’re now using the help of a nonprofit organization that connects volunteer pilots and plane owners with animal groups that need animal transportation.

So far, private pilots have flown 50 Canine Companion puppies from California to other states.