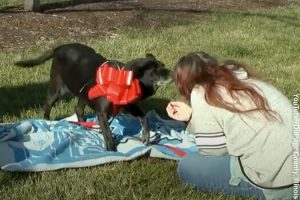 A service dog who went missing for more than 3 years is finally back with her family and home for the holidays.

Steve and Debra Mejeur said their black lab mix, Lola, disappeared in 2017 while they were visiting a friend’s house in Illinois. Somehow, she managed to escape from the friend’s fenced-in backyard, nearly 3 hours away from the Mejeurs’ home in Kalamazoo, MI.

Debra, who has epilepsy and grand mal seizures, told CBS News that she didn’t just lose a pet that day — she lost her seizure response dog, too.

“I went through so many different emotions when I found out [Lola was missing],” she said. “I immediately started walking around the neighborhood and yelling out her name.”

Despite searching through the night, the Mejeurs returned home empty-handed. But they never gave up hope.

For about a month, the couple spent their weekends driving back and forth between their Michigan home and Elk Grove Village, IL, searching neighborhoods in an effort to find Lola. Debra said she even posted in local Facebook groups for 2 years, begging people to keep an eye out for her.

Then, out of the blue, the Mejeurs received a message on Dec. 3 that Lola had been found by DuPage County Animal Control in Illinois.

“I immediately called the shelter and asked, ‘By chance, do you have a female black lab named Lola there?’ The lady on the phone quickly responded with ‘Are you Debra?’ I started shaking and crying,” Debra told CBS. “I was relieved that she was finally safe.”

It turns out, a local couple had been feeding Lola outside for several years — but every time they tried to catch her, she ran away. Eventually, they were able to grab her and bring her to the shelter, where her microchip was scanned.

“We are just over the moon and forever grateful to the couple that looked after her,” Debra said. “They are now a part of our lives forever.”

Lola and her family were finally reunited Dec. 5. DuPage County shared a video of the sweet moment on YouTube, crediting the microchip for the reunion.

Lola didn’t know what was going on at first, but the confusion didn’t last long. “It took her a little time to recognize me,” Debra said. “When she finally came up to me, she did a small sniff, licked my forehead, and that’s when she knew.”

Losing a service animal is about more than losing a pet. There are about 500,000 dogs in service of helping people in the United States, according to the Department of State. Service dogs make it possible for people with disabilities to live independently and overcome the challenges of day-to-day life.