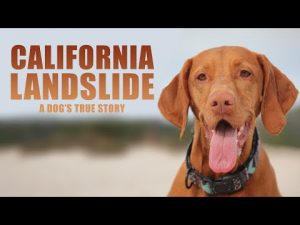 In May 2017, the largest coastal landslide in California’s history buried the scenic Pacific Coast Highway under more than 1 million tons of dirt and rock. A new documentary short film produced by Dana Richardson and Sarah Zentz, California Landslide: A Dog’s True Story is the captivating account of the two filmmakers and their beloved dog as they face this catastrophic natural disaster and forge an unbreakable bond. The 18-minute documentary is told through the eyes of Dana and Sarah’s dog, Anika, who encourages humans to love and protect the planet we call home.

The filmmaking pair have been directing and producing independent documentary films as Dana & Sarah Films since 2008. Their powerful documentaries Back to Eden (2011) and Goshen (2015) have received critical acclaim and prestigious film awards throughout the world.

The Bark spoke to the filmmakers about their latest film and the role Anika played in its making. As part of our Earth Day 2020 celebration, we are proud to bring you the exclusive premiere of California Landslide: A Dog’s True Story.

A: We decided to tell our story through the eyes and voice of our dog Anika because her playful personality lightens the mood and brings levity. Anika’s heartwarming point of view offers an approachable perspective on the impacts of the climate crisis. Plus, she is super-lovable! Additionally, we wanted to honor her for saving our lives.

Q: What role did Anika play in your lives before, during and after the epic coastal landslide?

A: Anika helped us cope with the stress and uncertainty we faced during these times by always being by our side. Vizslas are notorious for being attached to their humans. They even have the nickname “Velcro Vizsla,” because they tend to stick to you. Anika, though not a registered emotional support animal, offered us emotional support during the most difficult times.

Her breed is also known for its high energy. Typically, Anika gets at least an hour of off-leash running every day. After the disaster, there were days when we didn’t want to go outside, but Anika never let that happen. She motivated us to be active. Taking her on long hikes through the redwood forest was the daily routine that provided us with exercise and socialization, which without question helped us recover from the traumatic experience.

Q: Could you tell if Anika experienced these events differently than the two of you did, either before or during the landslide?

A: Anika definitely was behaving as if she was aware that we were in danger before we realized the extent of the catastrophe. When the landslide activity started, we heard boulders crashing our home during the night. Anika was standing up, alert. We thought it was just a small rockslide and nothing to worry about.

When we tried to walk down the mountain to survey the damage from the storm, Anika completely stopped in her tracks and did not allow us to go farther. We thought it was strange, but we trusted her instincts. Little did we know that we were walking right into an active rockslide zone.

Later, we encountered the rockslide on our driveway that trapped us on the mountain. We couldn’t help but wonder if, had we not listened to Anika and turned around, the rockslide could have potentially hurt us.

Q: You mention in the film that people who experience trauma heal sooner and more completely when they have a dog to assist. Tell us more about that.

A: Research shows that disaster victims suffer from tremendous PTSD and depression, as many are displaced from their homes and separated from familiar surroundings.

The immediate increase of stress was attributed to the challenges faced by pet owners in protecting their animals during evacuation and in difficulties finding pet-friendly shelters. However, the long-term recovery improvements from PTSD after a disaster were attributed to their animals’ emotional and psychological support, as well as to the increase of pro-social behaviors. Especially with dogs, since dog walking was linked to preventing loneliness and enhancing social interactions that helped victims recover from PTSD

We found this to be very accurate to our experience with our dog during the aftermath of a massive natural disaster. She helped us recover from the trauma through her companionship and an increase in our outdoor activity.

Q: The rebuilding of the coastal highway required a herculean effort. Do you think such reclamation projects are essentially futile in the face of the changing natural forces?

A: The rebuilding of the coastal highway was a huge undertaking, one that cost $54 million and took more than a year to reopen the highway. The coast of California continues to have landslide activity that challenges engineers to come up with solutions to the ongoing earth movement. Making efforts to protect and restore the environment is urgently needed to provide long-term solutions to the impacts of climate change.

Q: What are your plans for the film? Will Anika take part in the promotional and educational outreach?

A: We have completely transformed our original film-distribution plans due to the Covid-19 pandemic. We decided to host the world premiere of the film for free on the Dana & Sarah Films Youtube channel. During the premiere, we will be chatting LIVE with audience members through a chat forum next to the YouTube player. You can join in the premiere screening and chat on April 22 @ 12 noon EDT (9 a.m. PDT).

We are grateful to wonderful publications such as The Bark, who are helping us spread the message of the film!

Unfortunately, all film festivals have been postponed or moved online during this time. Regardless, we have submitted it to a small selection of film festivals nationally and internationally. We plan to participate in film screenings with Anika in attendance when the quarantine is lifted and it is safe to travel. For upcoming screenings, visit Dana & Sarah Films.

If you would like to support the filmmakers’ audience and outreach efforts, make a tax-deductible donation through the International Documentary Association.