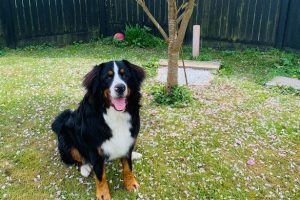 A therapy dog dubbed “Dogtor” Loki is being celebrated for going above and beyond in the line of duty.

The two-year-old Rottweiler and Go Team Therapy Dogs are among the recipients of this year’s American Kennel Club (AKC) Paw of Courage awards. The program recognizes dogs that serve their communities and make an impact on the lives of their human counterparts.

In the case of Loki, the pooch and his owner, Caroline Benzel, a medical student at the University of Maryland School of Medicine, have worked throughout the pandemic to deliver more than 5,500 care packages to medical professionals working on the front line.

Since its launch, the project has taken off nationally, with similar campaigns started in eight other states. Through donations, Caroline and Loki have raised more than $80,000 to fund the kits, personal protective equipment (PPE), food, and supplies for health-care workers.

“We are thrilled to honor ‘Dogtor’ Loki and the Go Team Therapy Dogs with AKC Paw of Courage awards,” says AKC’s executive secretary, Gina DiNardo. “These canine heroes are bringing comfort and smiles during tumultuous times and these awards give us a chance to recognize the important work they are doing.”

Other 2020 Paw of Courage recipients include:

“These therapy dogs have all adjusted to the changing times due to the global pandemic and continue their important work to comfort those in need,” AKC says.