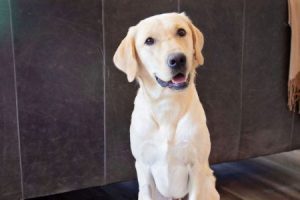 yellow Labrador retriever named Paul was born to be a Southeastern Guide Dogs superhero, but as fate would have it, that wasn’t to be.

Barely out of puppyhood, the 30-month-old dog spent his formative months like every future guide dog, living for his first year or so with puppy raisers, and then heading back to Guide Dog University for professional training.

Paul was initially raised by a very active, on-the-go family in Orlando, which turned out to be quite overwhelming for the young pup with a calm, laid-back personality. After being returned to the Southeastern Guide Dogs campus in Palmetto for reassignment, the 7-month-old puppy needed about six more months of puppy-raising.

“They gave him to us and asked us to focus on positive behaviors by redirecting his attention somewhere else,” said Apollo Beach resident, Chip Barker. He and his partner, Chris O’Leary, have a longstanding relationship with the school as “puppy finishers.”

So Paul moved in and completed his basic training before heading back to campus in August 2019 for professional assessment and career training. It was decided there he’d be best suited as a veteran’s service dog, and his training began.

“All of his progress reports were phenomenal,” O’Leary said. But then the pandemic hit.

In March, O’Leary and Barker were asked to take Paul off campus (like all of the other dogs at Southeastern at the time) and care for him. They were told he had a bit of a cough and was being treated with medication.

He was No. 1 on the placement list, but as the months went by the cough persisted, and Paul was held back, O’Leary said, adding the school was doing everything it could to help the pup. It had him see a specialist in May, and that veterinarian placed him on a three-month course of (different) medications.

Ultimately, it was determined Paul could not be safely placed with a veteran, and other career options for him were explored to no avail.

“They dearly loved him,” Barker said. “He’s just so special. They tried everything possible to keep him in the program.”

But in the end, Southeastern “could not confidently place him as a working dog, so it was decided he would be dropped,” Barker said. “We got the call we were dreading (Nov. 19).”

Both men were devastated.

“We felt it was coming, but we knew he could have made a difference in someone’s life,” O’Leary said. “We kept hoping he could be placed.”

As is customary, the school offered Paul to his puppy raisers as a pet. If they chose not to take him, the dog would be offered to the public for a donation of $5,000. The guys had 48 hours to decide.

They spent those hours going back and forth on what to do. Twenty years ago, they had taken in and adopted another career-changed dog as a pet and temporarily stopped puppy raising. The dog developed bone cancer and died 11 years later, after an exhausting and heart-wrenching battle with the disease.

Afterward, they went back into puppy raising and enjoyed it so much, they felt they’d never own another dog. But neither of them could actually bear the thought of Paul’s going to a new home and both realized their home was actually the best place for him to be.

“After a whole lot of crying, debating and sleeplessness, Paul’s trainer came by the house to tell him goodbye and drop off some things for him,” said Barker, who thought she was coming to take him away. “Chris told her we decided we just couldn’t let him go. She broke down crying and so did I.”

That’s how Paul went from being a future superhero to becoming “Paul Barker-O’Leary.” Instead of changing the life of a veteran with PTSD, he’ll simply be a hero to the guys who trained him.

“He’s changed our lives and will continue to do so with everyone who meets him,” Barker said.

O’Leary and Barker will take a short break before accepting a new puppy to finish for Southeastern Guide Dogs. But this time around, things will be a bit different. Paul will take part in its training.