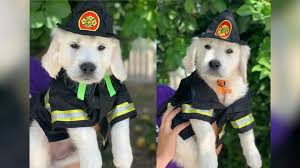 A pair of Golden Retriever Puppies took oath on Monday to serve as therapy dogs for the Hanford Fire Department.

California Service Dog Academy, based in Visalia, provided the dogs to Station Number One.

The non-profit raises, trains, and assigns service dogs to veterans and other agencies.

Last week the puppies visited the fire department to help them get used to the environment.