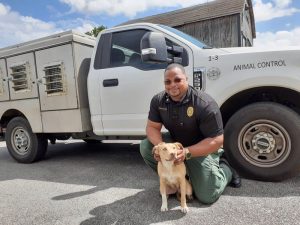 More than five years ago, a former law -enforcement officer decided he would secure the community in another way.

He previously worked as a corporal in the Lowndes County Sheriff’s Office jail division and has been a unit director for the Boys and Girls Club, but his journey led him elsewhere.

Brown sought out protecting animals and become an advocate for them.

“The fulfilling part of the job is keeping the community safe from aggressive domestic animals (and) investigating cruelty cases,” he said.

He receives support from local law enforcement, as well as the court system, to assist in the conviction of people who commit animal crimes, he said.

Getting justice for animals that have been abused drives his passion. Brown said he finds purpose in educating pet owners on how to properly care for their pets while also offering resources to them.

He teaches people about laws applying to animals and helps injured animals.

“Animal control is not a job to me but a service to the community that I enjoy doing,” he said. “I have always been active in the community from mentoring kids, helping families that are in need, coaching youth sports, voting drives and helping former incarcerated citizens with finding jobs and adapting to society.”

For the shelter, Brown helps the director with administrative responsibilities and helping shelter staff with dogs that are considered aggressive and dangerous.

“I truly want (to) recognize my animal control officers and the shelter staff for their hard work and dedication that they provide daily on the job and the passion that they have for the animals,” he said.

“The animal control officers and the animal shelter staff would not be successful without the caring citizens, animal rescues and local law enforcement that help provide the best wellbeing for our animals in Lowndes County.”

To be employed with animal services, a person must have a passion for working with animals, exhibit patience, possess good observation skills and have situational awareness, he said.

Brown advises anyone faced with animals that are in distress or require assistance to contact Lowndes County Animal Control, (229) 671-2760, rather than approaching them.

“Distressed and injured animals can seriously hurt you if you do not have the training in handling them in those situations,” he said.