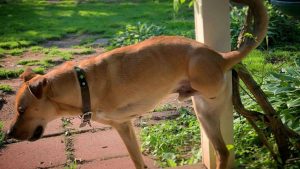 Sometimes, nature can truly be incredible.

A 3-year-old dog that had its legs amputated has beaten the odds and is able to walk on two right legs, British news agency SWNS reports.

Deuce, a Kentucky brown dog, was discovered in a ditch with broken and infected legs that had to be removed. He was later adopted by Domenick Scudera, who also cares for two separate two-legged dogs, the news outlet reported.

“Deuce is completely mobile and doesn’t need any extra help at all – he is amazing,” Scudera, 55, said. “He defies logic.”

Now residing in Collegeville, Pa. with his adopted brothers Cyrus and Lucky, Deuce and his brothers travel to hospitals to visit children as therapy dogs, providing inspiration and showing that what may be insurmountable odds can be overcome. The three dogs also have their own Instagram page, which has nearly 50,000 followers.

Scudera, a theater professor at nearby Ursinus College, said he is amazed that Deuce does not need the help of prosthetics or wheelchairs and is agile as he is.

“Although he only has legs on the right side, he is very strong and stable and can walk and run just as steadily as any other dog with 4 legs,” he explained. “Deuce doesn’t use a wheelchair. It is incredible that he is as agile and balanced as he is without one.”

“They have completely changed my life for the better,” Scudera added. “They mean the world to me.”