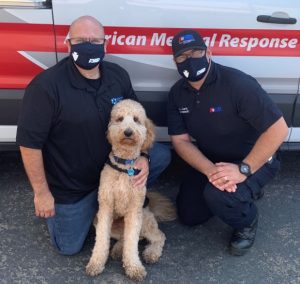 When he was 8 months old, he received his Canine Good Citizen Certification (CGC), passing tests of American Kennel Club standards of obedience. After that, he started with a therapy dog group, but that group was suspended because of the coronavirus pandemic. Rampart has visited all San Bernardino County AMR and Reach operations for various visits and after criticalcalls. He has also visited the Victor Valley paramedic program and local hospitals to meet with their staff after some critical calls to provide emotional support, according to the news release.

Now that he is certified, Rampart joins the Global Medical Response therapy dog team as one of 22 dogs across the country ready to respond to caretakers wherever he is assigned.