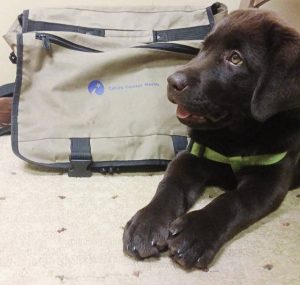 Penny, a spaniel mix who works as a canine advocate for domestic violence victims through Crisis Center North, is nearing retirement.

She was adopted from Action for Animals in Derry Township and attends court dates with victims to provide emotional support. But before she retires, she has one more job.

She needs to train an intern.

Technically,Crisis Center North legal advocate and canine intervention specialist Cheri Herschell does most of the roughly two years of training. But Penny will be on hand to set a good example for Rune, a 2-month-old chocolate Labrador retriever born to one of Herschell’s dogs this summer.

“The program is still prioritizing shelter dogs, but Rune really caught our eye with some of the things she’s shown since birth,” said CCN’s executive director Grace Coleman. “We’ve been really impressed with Rune’s behavior. I think she’s going to do great things.”

Herschell said she has seen the same promise in Rune’s early visits to the Oakdale court of Judge Anthony Saveikis, who has welcomed CCN, its animals and the work its staff does for victims.

“The first thing we look for is a dog that’s very personable,” Herschell said. “It’s a dog that enjoys interacting with people and is naturally drawn to them over other distractions in the environment.”

An active district magistrate court is full of people talking, defendants clinking handcuffs or leg irons, and plenty of opportunities to capture a young puppy’s attention.

“We look for dogs that enjoy a person’s company enough that they’re not distracted by the outside environment,” Herschell said.

“It’s a wonderful opportunity that not many courtrooms would allow,” Coleman said. Allegheny County District Attorney’s Office Spokesman Mike Manko said his department is honored that CCN partnered with them to make the animal advocate program happen.

“In any type of abuse case, including domestic violence cases, the welfare of the victim is paramount,” Manko said. “The contributions made by Penny, Ari and soon Rune toward helping victims deal with the court process, which can be very stressful and even intimidating at times, are as important as anything in the process. Plus, it’s a great example of various segments of the criminal justice system working together for a common goal.”

“Rune had a client going through the hearing process, and she did remarkably well,” Herschell said. “When the client was unable to pet her because of the circumstances, Rune went under the chair and laid on her feet.”

Fully training an animal advocate can take up to two years. But Herschell is confident Rune will be successful.

“After we make sure she’s comfortable in court, we’ll move her to a regular schedule where she’ll be going on a weekly basis,” she said.