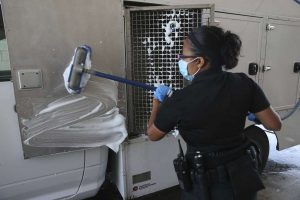 San Antonio Animal Care Officer Adrianna Preciado washes the animal compartments of her vehicle in a plastic container last month. After the compartments dry, she sprays them with sanitizer. Animal Care Services encourages pet owners to have an emergency plan in place for pets if they contract the coronavirus.

Animal Care Services officers are responding to a growing number of phone calls concerning pet owners who have tested positive for the coronavirus.

Dispatchers for the city’s 311 non-emergency call line have reported that some pet owners in the past month have refused to release their animals to first responders in cases where they had to seek treatment for the virus and wouldn’t be home for some time.

Since the stay-at-home orders took effect, ACS officers have responded to four potential exposure cases, ACS assistant director Shannon Sims said, including one that involved the owner of an animal that had to be relocated. Officers entered the home in full protective gear and removed the pet to the ACS shelter, where it was later turned over to family members.

“We try to plan if we need to pick up the animal or determine if there is someone who can take the pets,” he said. “We can go through our database to find someone to track down and if there are not any next of kin or friends listed we will take the animal in without issue.”

Sims said residents should have a discussion with a family member or friends as part of a fallback plan for the care of pets.

Asking for identification is standard procedure, and it’s also now standard for dispatchers to ask if a resident has the virus and if so to add the information in the write up of the call. Officers have the resident take a photo of their identification and text it to a city-issued phone, so the exchange of information can be done without touching.

A team of ACS officers has been trained on such responses and has the necessary personal protective equipment, gloves and gear, he said.

“It’s about protecting not just the officer but the people as well,” Sims said.

Sims said when officers talk to a resident about an animal issue, they’ve already been trained to stay at least six feet apart, allowing the officer to react safely if a call goes wrong.

Sims said the incidents remind him of Hurricane Harvey relief efforts when people seeking shelter in San Antonio were reluctant to let go of their pets.

He said ACS began putting emergency plans into place when the city started monitoring the expanding coronavirus issues overseas and evacuees from China and then cruise ships were quarantined at Joint Base San Antonio-Lackland.

Sims said the chances of someone contracting the virus via someone’s pet are extremely thin. There have been recent and rare reports of cats and dogs becoming infected with COVID-19 from humans, but not the other way around.

ACS operations manager Bethany Colonnese said on March 19 the agency had installed new software that allows for curbside service. With the front lobby closed, it’s a wait-in-car pick up system, with appointments required for foster and adoption services.