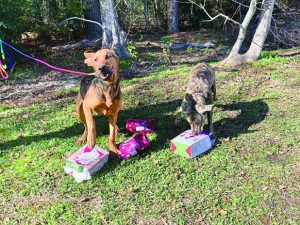 Ville Platte’s animal control facility is at the end of a badly-damaged gravel road behind the Girls and Boys Place, next to the sewerage treatment plant. A couple of weeks ago, someone dropped off a dog at animal control when no one was there. The dog was found the next day in the treatment pool. He had to be pulled out and hosed off. There is one animal control officer, Aaron, who is responsible for the city’s dogs. The job can be overwhelming for one person, and the dogs would not get enough social interaction without the few volunteers who try to make a difference in their lives.
Melissa Gibson, one of several volunteers, made some Christmas bags for the pound’s canine residents. The bags contained treats and toys and seemed to cheer up the pooches, though they were happiest having human interaction. Gibson said she goes often to walk them and give them the attention they desperately need. Gibson is a volunteer with Desperate Dogs of Rural Louisiana, along with Mae Ledeaux, Anne Marcantel, Linette Buller, and Brenda Demourelle. They try to get dogs from rural parishes adopted, and help to take care of shelter dogs when they can. Gibson says shelter animals are a never-ending cycle in southern states because not enough people are spaying their pets. “Northern states have spay and neuter laws, so it’s hard for residents to find dogs to adopt. These states have helped rural strays by vetting and transporting our animals up north. When the dogs reach the destination crowds, they are cheering happily to receive their family pet. They have gone through many steps to assure they will be in a safe home.” The Humane Society of the United States estimates 70,000 cats and dogs are born each day in the United States. The Louisiana Animal Welfare Commission (LAWC) recommends parish and local jurisdictions mandate all pets adopted from public or private shelter be sterilized before release to the public. According to them, “It is important that the facilities charged with euthanizing the surplus are not contributing to it. The impact of the above recommendation will be to reduce animal suffering and eliminate the unnecessary euthanasia of thousands of stray and abandoned pets.” According to the American Society for the Prevention of Cruelty to Animals (ASPCA), each year, approximately 1.5 million shelter animals are euthanized (670,000 dogs and 860,000 cats).

Spay/neuter surgery can be costly. SpayNation of Lafayette offers low-cost services, and even has a special program for feral cats, which is even less expensive than the pet services. Gibson said she dreams of having such a low-cost spay service in Evangeline Parish. In the meantime, Ville Platte has to rely on rescue organizations, which are the driving force for saving animals in city pounds. Without them, the animals would be euthanized simply because there is not enough room.

As important as rescue groups are for rural pounds and shelters, Gibson said some rescue groups are turning down Ville Platte dogs because of the high rate of heartworms in the city’s animals. “Heartworms cause our animals to suffer a horrible death that could be easily prevented with a shot once or twice a year. Monthly prevention is also available.” According to the American Heartworm Society, Louisiana and Mississippi led the nation in heartworm disease.
Several months ago, Mayor Jennifer Vidrine said the city was having the dogs vetted. They have just started getting them treatment, which will help to get them into a rescue shelter. Until the city can control the heartworm problem, at least one rescue organization will not be taking the dogs.
Gibson urged everyone to give their pets heartworm preventatives because heartworms can do major damage, often ending an animal’s life early. She said once they get heartworms, the treatment costs 25 times more than using the monthly preventatives. Once a pet with heartworms has to be treated, they must be restricted in movement and may even be hospitalized.
There are currently nine dogs in the city pound. They only take in dogs. Many do not have beds, only sleeping on cold, concrete floors. Gibson said they need more volunteers to walk the dogs and help get them socialized. They also need small blankets, dogs beds, and treats. If anyone would like to volunteer or donate, they can contact Melissa Gibson at 337-224-6708, or go to the city shelter and speak with Aaron.