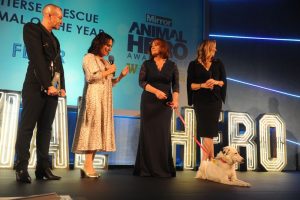 From giving us a reason to go out, to providing cuddles that eased the pain of isolation, pets were a lifesaver for millions of us during months of lockdown.

And to celebrate their incredible impact Helen Glover and Steve Backshall are back to lead our hunt for nominees for this year’s Mirror Animal Hero Awards.

As well as pets, rower Helen and wildlife TV host husband Steve also want to hear tales of animal-lovers who deserve to be honoured.

Steve said: “Lockdown was tough, but one thing is certain – having made it just a bit easier.

“All the things animals give you – unconditional love, companionship, emotional support, or just an excuse to get some exercise, have been more important than ever.

“We can’t wait to hear about the animals that helped people get through this incredibly hard time.”

The couple hosted last year’s award ceremony at London’s Grosvenor House, but there will be no red carpet ceremony this year.

Yet Helen insisted: “The most important thing about the Animal Heroes is the same – shining a spotlight on animals and people who make the world a better place.”

We are searching for the most inspiring and uplifting stories of heroism in the animal kingdom.

Whether it’s a dog or cat who has battled back from neglect, a caring animal who transformed someone’s life, or a simply a loyal companion, we want to hear about them.

The awards, with our friends at pet food firm Webbox and our charity partner Battersea, also honour people who are dedicated to making life better for animals.

Last year’s winners included schoolgirl pals Sophie Smith and Kyra Barboutis, who set up a hospital for hundreds of hedgehogs, and Eduardo Goncalves, leader of the fight to ban trophy hunting.

Tony Raeburn, CEO of Webbox, said: “The strange times this year have highlighted the special bond people have with their pets, which makes it such an important year to share these amazing stories.”