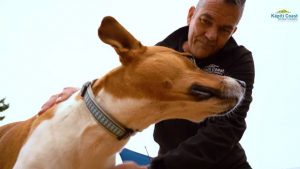 The recent upgrade to Kāpiti Coast District Council’s animal shelter is enabling the public spaces and animal management team to provide a greater standard of care to animals who come into their care.

The renewal project included improvements to the shelter’s drainage, heating and insulation, housing and workspace in the existing enclosures.

It also included the creation of a new space for veterinarian treatment, improved access and safety for arriving and departing animals, and an upgrade to fencing to prevent escape.

Environmental standards manager Jacquie Muir said the welfare of the animals was the catalyst for the renewal project.

“To meet the Code of Welfare of Temporary Housing of Companion Animals, guidelines and standards which sit under the Animal Welfare Act 1999, we needed to make improvements to the shelter.

“We worked closely with a local architect designer and contractors to create a space that is truly a home away from home for the animals who come into our care.

“In fact, sadly for some of the animals we manage, it will be a great improvement.

“As part of the design process we got some great ideas from other agencies, like rolling pipes running horizontally along the top of the fence preventing dogs from leveraging themselves over the fence and escaping.

“We even considered the dogs when choosing the paint colours, we went with colours that are bright for us – but perfect for them, due to their limited colour perception.

“The shelter is now safer for our public spaces and animal management officers with the addition of adjustable containment cages to help them manage aggressive animals in a way that is comfortable for both the animal and officer.

“We also improved access to the shelter so officers are able to transport dogs in and out of the shelter safely, and they have the ability to feed dogs without entering the cage.”

Public spaces and animal management officer Lee Greedus said the team are better equipped to look after the 300 plus animals who come through the shelter each year.

“Our officers are committed to ensuring the best outcomes for the animals that come into our care.

“While they’re with us, we treat them as our own, we make sure the dogs are exercised, we walk them and let them play in the large outdoor areas with ropes, balls and platforms to jump from.

“We also now have a bath and vet area where we can clean dogs and administer worming and flea treatments if we need to.

“We make sure the animals are kept warm or cool – depending on the season, and we keep them fed and well-watered.

“While most dog owners love their dogs dearly, they’re not always aware of their responsibilities or the level of care required to properly care for a dog.

“It’s part of our job to investigate complaints and proactively promote the welfare, care and control of dogs in our communities.

“Unfortunately the reality is that there will always be a need for an animal shelter, hopefully our proactive efforts will reduce the need over time, but in the meantime, the animals that come into our temporary care will always be comfortable and well cared for.”