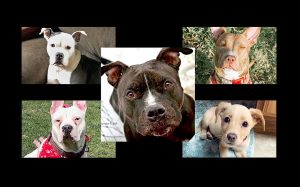 AmeriServ Bank recently presented a total of $1,000 to three area animal organizations as a result of its recent “Paws for a Cause” social media pet photo contest.

Customers were invited to submit photos of their pets to AmeriServ’s Instagram and/or Facebook pages. Users at the two sites then voted for their favorite pet photo and nominated an animal charity to receive a donation.

A total of 38 entries were submitted for the contest, with the three photos that received the most votes advancing to a final round.

“We wanted to engage social media users, spread positivity and lift spirits during what has been a trying couple of months for many people,” said Susan Angeletti, senior vice president of marketing and alternative delivery services. “Combining a pet photo contest with charitable contributions to local organizations in need fit the bill perfectly.”

First prize was awarded to Ginger, a 9-year-old golden retriever and therapy dog owned by Debra Noble. AmeriServ made a $500 donation to the Humane Society of Cambria County as part of this award, and Noble also donated her $100 prize to the humane society.

“Ginger is truly an example of what an adopted dog can do. At (6) years old, she became a therapy dog. She truly loves doing pet therapy and we are anxious to get back to work soon.”

“’Paws for a Cause’ has helped us during our busiest time of the year,” she said. “With nearly 150 animals in our care, including dogs, cats, kittens and birds, these funds will help us to continue to provide medical care and purchase those supplies that are depleting, like non-clumping cat litter and wet kitten food.”

AmeriServ also donated $250 each to Habitat for Hounds Animal Rescue and Centre County PAWS in honor of the two runner-up recipients.