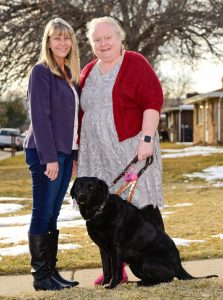 The nonprofit, which recently relocated from Richmond, Va., hosted its first group session Feb. 19 but canceled the second, which was scheduled March 18, due to the pandemic. These monthly sessions would have been facilitated by coordinators with the group with help from dogs provided by Therapy Dogs Boulder County at Longmont United Hospital. The group wanted to continue supporting the community with therapy, but was not left with many options as public health orders that mandated social distancing took hold.

“Getting the word out amid COVID has been difficult,” said Marcia Patrick, who acts as an advisor to Rise Phoenix Rise.

The group decided to host Animal Antics, a free Zoom support group for people ages 18 and older, at 4 p.m. every Monday. The remote sessions feature conversations about animals and how to use them to cope with mental health issues. Executive Director Traci Jones said these conversations are especially important because of the increased isolation some people face during the pandemic. She is hoping to create a community within these calls where people can comfortably talk about their problems.

“Potentially more and more people will show up and we will have more vibrant conversations about the loneliness and isolation feelings we are having during this quarantine time,” Jones said. “It doesn’t replace the actual in-person meetings we could be having but it is an alternative.”

Facilitators encourage participants to share photos and memories of their favorite animals to help foster discussion and to help participants feel more comfortable talking about their mental health issues.

Coordinators hope participants will be able to better understand their mental health issues through tactics such as “animal mindfulness.” Coordinators ask thought-provoking questions such as “if you could be an animal what would you be and why.” The questions are meant to create a discussion that can be used for participants to better understand their mental health.

“One of the things we learned is that you can get someone who is terribly shy and terribly noncommutative to open up when there is a dog involved,” said Patrick. “That’s where the therapy dogs really help, it takes the pressure off them.”

According to Jones, participants learn through these sessions how to incorporate animals into their “wellness toolbox,” which is a set of actions a person can do to take care of their mental health.

Sometimes the calls will feature dogs like Jalapeno the German shepherd, but Jones said it is difficult to keep animals still in front of the screen for long periods of time. Normally they would have multiple dogs at every session if they were in person.

Outreach has also been difficult due to the pandemic because of the limits ways the group can serve the community safely, according to Jones.

“It was very hard to transition to virtual,” said Jones. “I would like more people in Colorado to learn from us and benefit from us.”

In the future, the group wants to incorporate one-on-one sessions to better serve their participants. Sessions will remain online until it is safe to meet in person.