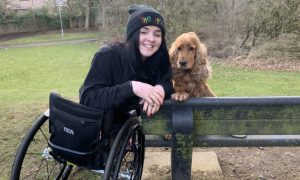 Saddle Up Ranch, located just off the A926 on the edge of Blairgowrie, provides animal therapy to people from Perthshire, Dundee and Angus while rehabilitating animals.

Jessie, who also runs a dog training business, believes that after lockdown restrictions are lifted, more people will require their services.

She said: “We’ve run this facility for six years and it really helps vulnerable people. We’ve even got contracts with some schools.

“Our clients come from Perth and Kinross, Angus and Dundee. We had over 1,000 visits last year and held workshops every weekend over the summer. Just now, we’re getting 10 to 15 visitors every day.”

The non-profit organisation, which is run by volunteers, has been based at the Perthshire site for almost two years, having previously operated from Glamis, but their lease is set to expire at the end of the summer.

Jessie said: “We need to find a new central location somewhere in Tayside. We only need about five or ten acres for rough grazing – we’ve got evidence-based funding to build stables.

“There’s going to be a huge spike in anxiety and depression over this period and the ranch will be a massive asset after lockdown.

“We need somewhere to move into by the end of September. We’ve got success stories coming out of our ears but the only places we’ve found that are suitable are way up north, which isn’t good for our clients.”

Amongst those hoping Saddle Up Ranch can relocate nearby is Monifieth High School student Hannah Harper, who suffers from a rare neurological condition called Transverse Myelitis.

16-year-old wheelchair user Hannah was set up with therapy dog Lily through the ranch and said being paired with the cocker spaniel has turned her life around.

“We had been looking for a dog and the ranch was recommended to us. We got Lily, an emotional support dog in October.

“She’s completely changed all our lives, especially now during lockdown.

“I feel much happier and much more confident. School is something I’ve always struggled with and I spoke with my guidance teacher about bringing her in. They were very keen.

“For one, she gets us all out of the house more than we used to and overall she’s made us all so happy.”

One dog who has benefited from Jessie’s work is Togo, a Chihuahua approaching his third birthday.

Togo arrived from Kent in late March as an aggressive dog with behavioural problems, having bitten his owner.

Jessie successfully initiated big improvements, which she has documented on her Facebook page Dundee & Beyond Dog Trainer.