Anxiety during this pandemic 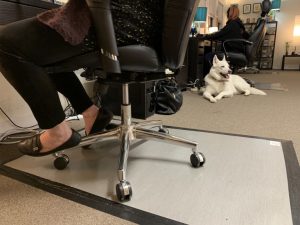 Leia, a Husky-Shepherd mix who is the pet of an OC WarmLine staff member, helps comfort the people in the office who speak with callers dealing with emotional issues related to mental and behavioral health. The WarmLine has seen an increase in calls the past few weeks from people stressed out over the novel coronavirus pandemic.

The voice sounded like so many others who have placed calls of help to the Orange County WarmLine in recent weeks: Anxious. Stressed out. Scared.

And the question the voice asked — the one every human is asking during the coronavirus pandemic — has no easy answer: “What if I come down with it?”

But WarmLine operators said this caller was unusual in at least one respect — he was a garbage collector.

“We never had sanitation workers call us before,” said Mariam Harris, who has been clinical director of the WarmLine since its inception 10 years ago.

The WarmLine is a confidential support service offered by the county to people who are suffering mental and behavioral health issues that aren’t considered an “immediate crisis.”

And, right now, the WarmLine is having a moment.

In a single day early last month, WarmLine operators handled 259 calls, about half from people who had never previously phoned in. This month, as the coronavirus pandemic has grown, the line has seen a steady 15% jump. That surge, in turn, has led to an expansion of WarmLine hours and consideration, by Harris and others, to go round-the-clock.

Most callers, Harris said, are in “a state of panic.” She ticked off the common concerns: “Am I going to get it?” “I lost my job.” “How am I going to make rent?” “What if I can’t feed my family?”

But such broad categories don’t capture the humanity of each call.

There was the laid-off family man who cried into the phone. The young woman whose father had just been sent for testing. The mom whose child was frightened enough to vomit.

And, of course, there’s the stream of callers who are suddenly stuck at home, fixated and terrified by what they can’t stop watching on TV.

“It stresses them out,” she added. “Because they are at home, with no activities, they are becoming more anxious.”

And that’s just the newcomers.

In the pre-COVID world, the WarmLine helped people who struggle with chronic mental health issues and behavioral disorders. Some call in daily or weekly, as if by appointment.

For them, too, the virus is a trigger. What’s more, their fears are growing at a time when stay-at-home rules are disrupting their regular counseling and sober living meetings. As a result, some regulars are calling the WarmLine as if on speed dial.

“Regular callers are already in a state of panic,” Harris said.

“Now, they are panicking more.”

Whether a regular or first-time caller, the people contacting the WarmLine want comfort and hope, if not absolute clarity about a health crisis that offers little on that front.

That soothing voice — and the simple power of listening — has been the WarmLine’s mission since 2010. That’s the year the county-funded program, operated by the National Alliance on Mental Illness – Orange County (NAMI OC) under contract with Orange County Behavioral Health Services, got started.

The OC WarmLine, and similar non-emergency phone services in other counties, handles calls typically routed their way by other operators who staff suicide hotlines. Those hotline operators already have made an assessment to determine if the caller is or isn’t experiencing a life-threatening moment of crisis. People also find the WarmLine number on the internet. And, recently, callers reaching the WarmLine have just contacted the Orange County Health Care Agency’s COVID-19 hotline and been transferred for some emotional support.

“What they need is the helping hand; the venting and just the releasing of anxiety, onto another human being,” Harris said.

The peer mentors (that’s the job title for people answering the calls) can do more than listen. They make referrals to local resources, including food banks, financial and legal aid, housing — whatever might be of practical help. The average time on the phone is 17 minutes, Harris said.

Like the callers, the peer mentors remain anonymous. They use pseudonyms to protect their privacy and safety, and work from an undisclosed location.

The office, however, is hardly generic. There are emotional support animals to help soothe the soothers. There’s a miniature schnauzer named Galileo, who belongs to Alvarez, and another staffer’s Husky-Shepherd mix, Leia, named after the “Star Wars” character.

The peer mentors include a mix of paid staff, interns and volunteers, about 30 in all. Not only are they trained to offer triage-type help for complex issues and the delicate state of mind inherent in most calls, but many also have the “lived experience” of their own mental or behavioral health issues.

In other words, they can relate.

Often, the callers have family, friends, or possibly therapists and psychiatrists in their support system. That’s a lot of people telling them what to do, noted Alvarez, who started six years ago as a volunteer.

“With us, it’s listening,” she said. “They know we’re going to hear them out.”

But even for experienced peer mentors, the volume and intensity of calls during the COVID-19 pandemic has been unnerving.