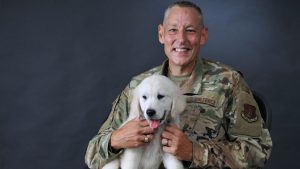 His name is Lincoln and he’s an English Cream Golden Retriever puppy.

The 10-week-old is a therapy dog in training for the 185th care team and was requested by Iowa Air National Guard Lt. Col Steve Peters.

Lt. Col Peters is a chaplain at the 185th and he says Lincoln has a big job ahead.

“The English Cream Golden Retriever have it in their DNA to want to be with people,” said Peters “They are a very empathetic breed and make fantastic therapy dogs.”

Lincoln seems to be adjusting to his new assignment fairly well, even though he spends quite a lot of time sleeping.

Peters said Lincoln started training for his career the day he was born. As part of his early tutelage, the kennel where Lincoln came from introduced him to unusual sounds and smells designed to acclimate him to the noisy, smelly world he would soon enter.

“What they are most interested in therapy dogs are characteristics of calmness and loving people, slow to react to startling noises, or being distracted from things that are going on around them,” said Peters.

Peters said Lincoln had been working hard even before he arrived at the Air Guard base, but there are months of training ahead. Still, just having Lincoln on the base has had an immediate effect on people.

“When he arrived at the base, there was a steady stream of people at the door,” said Peters. “God bless the little boy; he was happy and excited every time somebody would come in.”

Having a therapy dog like Lincoln in the workplace is becoming more accepted. Peters said therapy dogs break down mental barriers, making people more willing to open up and talk.