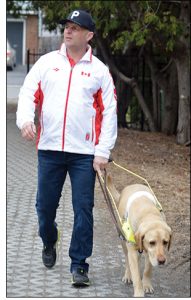 Trying to stay active while self-isolating is difficult for your average person. For athletes who normally split their time between dry-land training and working out in the gym, it is especially difficult, even more so when your gym has been closed indefinitely.

Orléans blind, death athlete Kevin Frost has been making do the best he can with daily workouts in his basement that include a 50-minute ride on his bike trainer. He also goes for walks ever day with his service dog Louis.

“I workout five days a week for about an hour and a half each day. I start with 10 minutes of stretching, followed by about 20 minutes working on my core and then 50 minutes on the bike and then my cool down,” says Frost.

The daily exercise routine helps keep him in shape both physically and mentally.

It’s been nearly six weeks since the Ontario government listed gyms and fit-ness centres among those businesses that had to close indefinitely and although he misses working out in the gym, he misses the human interaction even more.

“You really don’t realize how much you’ll miss the social aspect of working out in a gym it until it’s gone,” says Frost. “This self-isolation thing is tough.”

As for those people who are starting to get cabin fever or have been lulled into a state of lethargy, Frost recommends find-ing ways to get moving again.

“It’s easy to become negative with everything that’s going on, but life is what you make it. You can think every-thing is boring, or you can use it as motivation to get things done. It’s impor-tant to focus on the positive because as bad as things are, it could be a lot worse.”

After retiring from competitive speed skating this past winter, this was the year Frost was planning to focus on his golf game. Unfortunately, golf courses and driving ranges are currently on the list of non-essential businesses in Ontario, although there is talk that the province’s golf courses maybe among the first businesses to reopen under a strict set of guidelines.

Frost is hoping they will be open by the Victoria Day long weekend.

“It’s pretty easy to do physical distan-cing on a golf course, especially if you don’t have any golf carts,” says Frost who is still hoping to participate in the World Blind Golf Championships in South Africa in September. He’s also been invited to take part in the HANDA U.S. Blind Golf Championship which has been rescheduled for November in Arizona.

When he does, he will be playing with a custom-made set of clubs courtesy of Puma Golf which has agreed to be one of his sponsors.

“They were looking for a disabled golfer to be part of their roster and I’m the guy,” says Frost who also got clothing and new shoes as part of the deal.

The only thing left is for Frost to get back on the links. When he does he wants to be in the best shape possible.

For now he’s been practicing his putting on a section of artificial turf in his basement and he has been working on his swing with a set of soft-impact balls.

“It keeps me busy, but it’s not the same as the real thing,” says Frost.

For that he will have to wait a few more weeks.