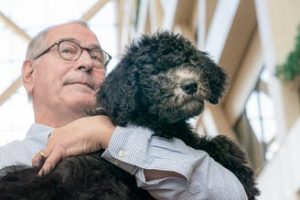 The newest staff member at the Hennepin County Attorney’s Office lay cradled in the arms of his handler and after five minutes of making his public debut, was ready to move onto the next distraction.

At four months old, Barrett the golden doodle puppy is still undergoing extensive training to prepare him to work with victims, witnesses and others. Hennepin County Attorney Mike Freeman said the emotional support dog — the office’s first — will start some work in about six months.

“We find that they’re particularly useful in juvenile cases when kids don’t want to be witnesses — they don’t want to be there,” Freeman said. “As you can see, holding this dog has calmed me down.”

Kathryn Newman, Barrett’s trainer, said the first courthouse to employ an emotional support dog was in Arkansas in 2003. Other early adopters around that time included courts in Illinois, Arizona and Hawaii, she said.

“The most important thing for Barrett is that he is going to make people feel at ease when he is … here, whether it’s someone who is testifying or if it’s the staff here,” Newman said. “This can be a very stressful location for some people, so he’s got some big shoes to fill, but he’s up for it.”

The black, fluffy puppy is 75% poodle and 25% golden retriever, which will help reduce or eliminate allergic reactions, Freeman said.

Barrett is undergoing “sensory” training to familiarize him to the sights, sounds and smell of the courthouse. He is expected to begin full-time work in about a year, and will work five half-days a week.

“This courthouse is tough enough for us adults,” he said.

In Ramsey County, Norie has met with victims about three to four times a week for the past six months. Victims who are meeting with prosecutors to talk about their cases are informed about Norie and can request her attendance.

“We had one woman … who just got kind of overcome and just couldn’t talk,” McConkey said. “And then she just started petting Norie and really kind of calmed down and was able to resume telling the prosecutor what happened.”

But the use of emotional support dogs isn’t without challenges. According to McConkey, in some jurisdictions defense attorneys have opposed allowing them in a courtroom for fear they could invoke jurors’ sympathy for the witness.

While Norie only works at the county attorney’s offices, McConkey said the plan is to introduce her into the courthouse building and courtrooms with no juries present. Allowing her to accompany witnesses during testimony is a distant possibility, she said.

“The more facilities that can have dogs like this, the better,” McConkey said. “It’s good for everybody.”

Freeman said the notion of employing an emotional support dog first crossed his mind when the topic was presented at a national district attorneys meeting about four years ago. Talks about getting a dog grew more serious about two years ago.

Freeman has a dog of his own, a golden retriever named Sam.

“All of us dog owners know there’s nothing like having Sam come down the front steps to meet me and give him a little scratch behind the ears,” he said.

Barrett, who was named after brothers who play rugby and because of his bearlike appearance, lives with an attorney from the office.