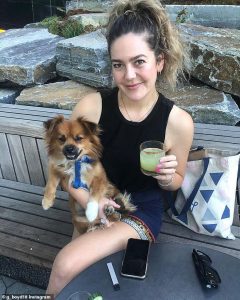 A young Australian woman has asked for strangers to give her $10,000 AUD to bring her dog home from New York – saying she needs him for ’emotional support’.

Georgie Boyd, 29, had to abandon her rescue puppy named Boston in New York when the US government locked her out of the country while she was visiting London because she didn’t have a current visa.

The wedding planner has launched a crowdfunding campaign to bring the Papillon-mix back to Adelaide where she is living. Ms Boyd is using GoFundMe in the hopes of raising $10,000 to bring reunite her with her pet.

She adopted Boston from a puppy shelter in New York in August, where she faced the difficult task of tempering his nerves after a ‘traumatic upbringing’.

‘He was abused and neglected as a puppy, he is afraid of skateboards and bikes which gives him a huge amount of anxiety living in NY,’ Ms Boyd said.

The fundraising total is based off covering the cost of returning the pooch to Australia and putting it through the country’s strict quarantine and biosecurity checks.

Ms Boyd said she needs the money to pay for Boston’s transport and his vet bills, special certificates, injections and bloodwork.

Strict biosecurity measures mean the two won’t be reunited until October at the earliest, as pets are required to get specific injections 180 days before entering the country.

Ms Boyd told Yahoo the coronavirus outbreak meant she was unable to return to her New York apartment when she left the country to renew her visa in London.

‘I was locked in London with a small suitcase – I thought I was going to be there for ten days so I literally had a pair of jeans, a jumper, a t-shirt and some activewear,’ she said.

I had no option but to come back to my parents in Adelaide.’

Her savings were drained paying for the unsuccessful visa renewal process and the cost of returning to Australia.

She also lost the security deposit and around $2,000 worth of furniture.

But she managed to organise for some friends to look after the dog while she worked out the logistics of bringing him to Australia.

Ms Boyd said it’s devastating being separated from her beloved pooch without a reunion in sight.

‘Boston is everything to me, an emotional support puppy, he would come everywhere with me and get anxious if I was not in eyesight,’ she said.

I dread to think of those who have pets for more serious issues who have now been separated from them.’

Ms Boyd is looking for a job in Australia to help cover the costs of bringing Boston home, but with the wedding industry grounded by COVID-19 opportunities are limited.

‘I had a wedding here in May in that decided to elope. Now I’m on the hunt for a creative role here, which given the situation is proving difficult,’ she said.