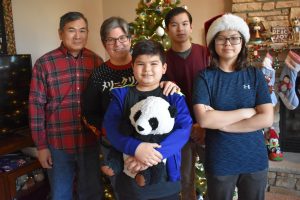 Nine-year-old Nico Furukawa’s letter to Santa this year asked for only one thing—good luck with his future dog.

Nico, who is autistic, is in the midst of a miracle unfolding.

His family’s greatest gift this Christmas was being selected to be recipients of a service dog trained specifically for children with autism. While some service dogs can cost $35,000 to $50,000 including training costs, a dog through the Canadian-based Dawgs2Heal costs a fraction of the price at around $10,000 for families. The dog is a bit of hope for Nico’s parents Nao and Susan Furukawa and his siblings Clare, 13, Luke, 16, and Yukie Furukawa, 34.

Susan has watched her son have more meltdowns as he gets older and as the pandemic wears on.

Like many people with autism, Nico can get overwhelmed with sensory stimulation and get confused when rules change. It’s also becoming more difficult to help Nico calm down with a weighted vest or blanket as he grows bigger.

“Imagine you live in a world where rules are completely arbitrary and you don’t know what they are. On top of it, everything feels louder or more difficult,” his mother said.

Although Nico is back in fourth grade at Kinnikinnick School, being home for months when school went online last spring slowed his progress. He had a difficult time adjusting to the noise and chaos of Zoom for school, changes to his routines and not seeing other students from March to September.

“For a kid who has to work hard to understand social skills, it was a huge setback and going back to school was really challenging,” she said.

The family first started considering a dog only a couple of months ago when they noticed how much Nico connected with the neighbor’s dog—a miniature Bernedoodle named Winnie.

“He’s attached to the neighbor’s dog. He connects with animals in a way he doesn’t connect with people. He had a hard morning and was not willing to get on the bus and saw Winnie the dog and totally changed his mood,” his mother said.

Susan spoke to a friend who urged her to consider a service dog as her friend had a connection with the founder of Dawgs2Heal.

While it can take up to three years to obtain a fully trained service dog, the founder had a litter of new golden retriever puppies born in early November. They were ready for training and the founder had experience with training them for those with autism.

Susan said Nico is filled with happy anticipation for the pup. His classmates are helping to raise funds, and Nico gets excited every time a quarter is dropped in the donation box.

“Just knowing this puppy is out there has changed his life already,” his mother said.

The family doesn’t know which puppy will be selected, but has already named the pup which will be female. She will be called Shiro, a brave and loyal dog companion in a Japanese folk tale.

In talking to other families with autism service dogs, Susan learned they can lay on or near children to help calm them. She is hoping the family will once again be able to travel if her son can have the calming presence of the dog. The dogs can assist with socialization skills as children begin to talk to people who may approach them to ask to pet the dog.

Most of all, the dog can provide unconditional love without judgement. Many children with autism have grown up around adults who may not have realized they were autistic and said unkind things to them about their behavior. Having a furry and accepting friend, may begin to give them much-needed acceptance.