Award For Therapy Whippet Of The Year 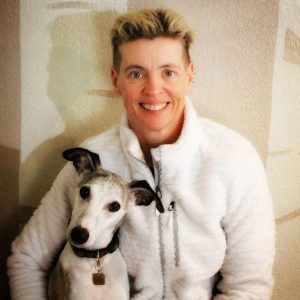 Klamath Falls duo Kelsea Cooper and her 9 year-old whippet Titan have gone on about 900 to 1,000 therapy visits to elder care facilities, hospice bereavement facilities and Oregon Institute for Technology in Titan’s 7 years as a certified therapy dog and touched countless lives therein.

The majority of their visits nowadays are to memory care and elder care facilities where Titan has had a particular impact on the residents, many of whom suffer from illnesses like Alzheimer’s and dementia.

The testaments to the effect he’s had on those he spends time with and the consistency of his company for those who need the stress relief earned Titan the America Whippet Club’s Willow Award for therapy dog of the year announced on April 12.

Cooper has nominated her boy before and wrote to the AWC stories of the ways in which senior citizens light up when Titan comes to visit and the ways seniors in college ensure they say goodbye to Titan before graduating from Oregon Tech.

While long term care facilities like those Titan visits have been closed to visitors to protect residents from COVID-19, Cooper and Titan still found a way to see their friends. After about two months of no visits, last Thursday the pair FaceTimed with a memory care facility. Even though it’s normally hit or miss when it comes to if those they visit at the memory care facility will recognize Titan, Thursday was different, Cooper said. Everyone they talked to remembered Titan and seemed excited to see him, even if they couldn’t pet him.

“That just shows how much of an impact we make,” she said.

Copper plans to video chat again Thursday to keep some consistency in the lives of those they visit and to continue contact in a time where visitors aren’t allowed.

Cooper has also sent them pictures of Titan and, most recently, a poster of him that says “We miss you.” She said that when she dropped the poster off at the door, Titan stared at the door, and Cooper could tell he wanted to go in.

Although Cooper has had award-winning Whippets all her life, from show dogs to agility competitors, Titan is her first therapy Whippet and her first dog to win an award for that work. Still, she said their nearly 1,000 visits haven’t been for the sake of recognition.

“It’s nice to show people that there’s more to life than awards, and you can make a difference with your dog,” she said.

She said the feeling of winning the award pales in comparison to the feeling she gets when making a difference in people’s lives.

The American Whippet Club shares the nomination stories of the dogs nominated for the Willow Award online, and Cooper said that, in sharing their story, she hopes they inspire others to take on therapy work with their dogs. She said she has been motivated to nominate Titan for the award so that she can share his story, and she feels the other owners also share their stories to inspire others, with the award as a perk.

As this year’s Willow Award winner, Titan’s name will be engraved on a bronze trophy of a Whippet that normally is displayed at each National Specialty event.

Titan and Cooper’s last therapy visit before facilities began closing due to the coronavirus was the Pet-a-pup event at Oregon Tech where they spend the day each quarter at the student union so students can come by and release some stress by giving Titan some love during finals week. Cooper said it was the day after they visited Oregon Tech that the Oregon Health Authority restricted visitors at long-term care facilities.

The annual National Specialty for the American Whippet Club, where awards are typically announced, was canceled due to COVID-19, but the AWC announced award winners on Facebook Live during the time the event would’ve taken place.

Although the banquet was canceled, Cooper said the next time she was out she got Titan a treat from Dutch Bros Coffee where, normally, after their visits they stop by and Titan gets whipped cream on a straw. She said the people at Dutch Bros know her and always ask if Titan is with her. This time she brought some whipped cream back from there so Titan could celebrate.

Cooper said Titan can’t wait to get back to his visits when it’s safe again, and he’s been asking for more pets from Cooper and her husband due to the shortage of love from those he comforts.

Cooper said they continue to do therapy visits because she can tell Titan loves it.