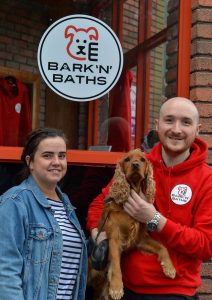 Bark ‘n’ Baths in Springtown Industrial Estate has been opened up by Garaidh Tomas and Aaron Griffiths and features four dog washing stations equipped with a professional shower and dryer and specially formulated shampoos and conditioners.

Garaidh said the idea came about after many dog owners had to start washing their own pets during lockdown. “All the dog groomers had to close but they were sharing videos online to show people how to wash and brush their dogs coat themselves,” said Mr Griffiths.

“People had no choice but to do it for themselves, but they were bent over their bath and giving themselves a bad back. Then they had to chase a wet dog around the house to try and dry them before they got that wet dog smell, and after all that they had to spend another half an hour cleaning their bath so it could be used by the rest of the family again.” Mr Griffiths hit on the idea of opening a self service dog washing salon, after numerous chats with his brother over lockdown.

“After lockdown people are looking to save as much money as possible and we are able to offer people the chance to wash their dog from as little as £7. It’s great for people who have taken their dog to the beach or a country park and want to give them a quick wash and get rid of any sand or muck.”

Every station at Barks ‘n’ Baths has been set up with an industrial shower and dryer, highly absorbent towels, and PH balanced dog shampoo and conditioner and disposable aprons and gloves.

“A dog’s PH level is different to a human so using the wrong product can affect their skin, coat and overall health,” said Mr Griffiths.

“If we can help someone maintain their dog’s health we are happy to do it. A 20 minute session will cost £7 and the price goes up from there to £10 for 30 minutes, £15 for 45 minutes and £20 for an hour which would be long enough to wash and dry a big dog with long hair.”

“We have had people come to us who have been told their dog isn’t suitable to go to a groomer, so they are delighted this service is here.”