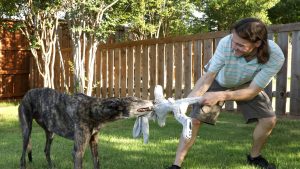 Before Dolce Gambino had more titles after his name than most of us have teeth; before he began brightening the days of almost 1,000 Facebook friends with his photographs and adventures; before he visited nursing homes, proffering mouth-held business cards to delighted residents; before he accumulated 100 collars and dozens of outfits, he was racer Genesis Way, more commonly known later as Lee.

As an athlete, he was busy — and speedy enough in his career to finish four races in first place, two races in second place and two in third. But while taking a curve during race No. 36, he fractured his left leg. The injury was severe, necessitating intricate surgery and follow-up veterinary visits — paid for by Greyhound Adoption League of Texas — plus months of rehab in a foster home.

Although Lee healed nicely, his racing career was over.

But life, as it tends to do, opens windows while shutting doors. So before we get more into Dolce’s role in that truism, maybe we all need to sit back for a moment of contemplation. These are (and forgive us if you can mouth the words as we say them) unprecedented and tough times. We are confused, we are sad, and we are trying to find normalcy in what is exceedingly a world that is anything but normal.

Which is why, right now, maybe we could all use a dose of Dolce Gambino. He can’t change what’s happening, but maybe he can help us change how we look at it. He can lick our faces only figuratively, but in so doing he can take us away, if even for a moment, from what might be draining our collective and individual spirits.

As a two-time greyhound owner and multi-time foster parent, I’ve fallen for plenty of this lovable, laid-back breed. But Dolce — ah, Dolce — has held onto my heart ever since being adopted by Christine and Don Beisert. He was fostered by friends of mine, and though I’ve only seen Dolce in person a handful of times, I’ve long swooned over his grace and beauty, been mesmerized by his escapades and accomplishments, ogled his intelligence, and been lifted by the love within his family.

Which brings us back to these upside-down days. A virus we can’t see keeps slamming doors; we, in turn, keep scrambling to open windows. Surely, our optimistic souls tell us, fresh air must still be out there; lessons must be lurking in all this mess.

So if we call upon luck and we listen very closely, we may find those lessons where we least expect them: Like six of them right here, culled from the subtle wisdom of an almost 12-year-old greyhound with the smile-to-hear-it name of Dolce Gambino.

Take a peek at Dolce’s Facebook page. There he is, wearing aviator goggles or a birthday cap or a bright yellow rain slicker. Eating a just-toasted marshmallow or a cupcake or a ribeye steak, either prepared by his vegetarian owners or delivered via room service on one of his out-of-town jaunts to 25 states. Participating in competitions where he sniffs out rats or leaps over hurdles.

“It’s easy to project yourself onto him, to see love and life through his eyes,” says Christine, who started his Facebook page on a whim and who updates it at least daily with photos and Dolce-driven postings like this:

Momma woke up the nayberhood skreeming at me to stop chasing the skwerl intruder.

“I try to stay out of politics and religion,” Christine says, “and focus on his world.”

Ten years ago, the couple, who live in Frisco, fell for the dog known as Lee after seeing him in a Greyhound Adoption League of Texas photograph, sleepily curled into a circle and wearing a bright blue bandage on his shaved right leg. They changed his name to Dolce Gambino and changed his life (and theirs) forever.

The name was chosen first as a loving nod to Christine’s grandmother, who was a piano teacher and often encouraged her students to play dolce, or sweetly. Don thought Dolce sounded too feminine, so they decided on Gambino for its tough-sounding mafia connotations (plus they’re fans of actor Donald Glover, whose musical persona is Childish Gambino).

“I did expect that adopting a greyhound would be adding a member to the family,” Christine says, “but I didn’t expect such strong maternal devotion and love.”

Christine and Don had no clue what signing Dolce’s adoption papers would ignite. They just knew they wanted a dog. Don grew up with a collie/German shepherd mix named Dusty, but Christine’s childhood pets were rabbits. She’d always loved horses, and she figured greyhounds had the same elegance and grace, but on a more manageable scale. Plus, working at home was lonelier than she’d anticipated; a dog would be a welcome companion.

So they settled Dolce into the condo where they were living at the time. Then, as neophytes to his world, signed the three of them up for a Greyhound 101 class. Dolce learned to sit, to stay, to come when called, to love learning. So the Beiserts signed him up for another class, and another. They met people who offered insight as well as inspiration to check out agility training, nosework and barn hunt competitions.

“As he learned more,” Don says, “we wanted to see what else he could do.”