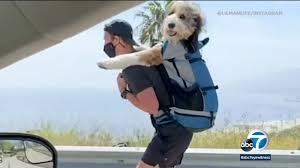 Benji is an adorable and very talented pooch whose tricks have made him a viral sensation. He’s also a therapy dog at Children’s Hospital Los Angeles, but during the coronavirus pandemic, he and his owner have had to get creative to connect with the kids. In the world of viral pet videos, Benji may be worth his estimated 20 million views.
It’s not every day that you see a 70-pound dog rollerblading on its owner’s back, but should we be surprised?

The 4-year-old Bernedoodle has been spotted skiing, off-roading and even kayaking – your typical dog stuff.

“This dude has seen a lot, he’s helped a lot and he’s made a lot of people smile,” owner Andrew Laske said. “Obviously, he’s my best friend.” Laske said these adventures were all part of the plan. “I had high expectations, I did not know what I was getting myself into,” he said. “I’m a calculated risk taker. For a lot of people, it looks extremely sketchy, but I wouldn’t do anything Benji in harm.” Though a video posted earlier this week got them thousands of new followers, Laske and Benji are working for more than social media stardom – they’re giving back.

“Seeing these kids lighting up in an environment like that…”
Benji is a certified therapy dog at Children’s Hospital LA, but due to COVID-19, his volunteer visits have gone virtual.

“It’s not the same as being there in person, because we don’t get to feel all the fluff of this guy. But at the same time, and still doing something, and still giving that distraction and still bringing some smilies.” Benji is raising money on Saturday for CHLA’s Walk and Play LA, which has now become a virtual fundraiser to benefit all programs.

Between the therapy visits and now viral videos, Laske and Benji are just trying to bring a little positivity with every post, like and share during an otherwise hectic times in our lives.

“What I’ve come to see is people love to see the human-dog connection, and ours is pretty freaking cool,” Laske said.