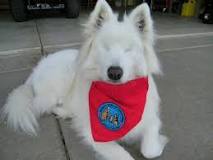 A blind Samoyed that was dumped in the parking lot of Wesley Hospital is now a service dog and certified therapy dog.

Ken Lockwood with the Eagle Valley Raptor Center says Tasha was put on death row at the Kansas Humane Society, but was rescued by the Wichita Animal Action League in the fall of 2015.

He says she was trained at the Hutchinson Kennel Club.

“She is potty trained, uses a dogie door, jumps in my truck, helps me with my balance since my back injury. Howls like a wolf when my sugars get low,” says Lockwood. “Goes up and down steps, uses the sidewalk as a guide to come back in the house. Stops at the top of the driveway, and lays down so she won’t get hit by a car. She runs around our 20 acres like she has eyes at the end of her nose.”

Lockwood says despite her abuse, she is the most lovable and sweet dog.

“I would encourage people to adopt dogs that have a disability because they make great pets and will love you forever. It has been five years now, and we thank God that WAAL saved her,” says Lockwood.