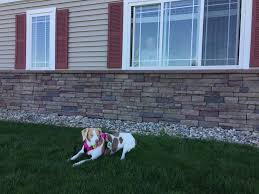 As Pat Ward drifts from one window to another, she holds a sign to the glass, hoping the residents will notice her arrival rather than startling them with a knock. The poster features a red heart with a smiling face and closed eyes, an homage to the four-legged star of these visits. Baby, an 8-year-old therapy dog, is blind and had her eyes removed long ago. She doesn’t hear well, either. She has heart issues and survived cancer. But her gentleness offers warmth. Baby has become a beloved guest at Island City Assisted Living in Eaton Rapids, Mich., a small town about 20 miles from Lansing. After six years of weekly visits, she is a familiar face, even if residents can only peer through the glass. Sometimes they’re already waiting.