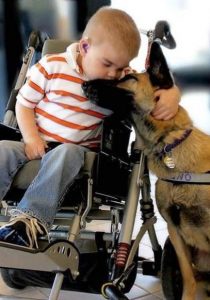 Lucas Lee Hembree, a Blount County boy who suffered from a rare genetic condition, has passed away at the age of 13.

Lucas was diagnosed with Sanfilippo Syndrome, a progressive condition ultimately that robbed him of his mobility, speech, hearing and neurological functions.

He also suffered from breathing issues due to damage in his lungs from a bout with pneumonia in 2019. At the end of his life on Tuesday, Lucas was under hospice care, which included medications to manage his pain.

When Lucas was originally diagnosed at age 2, doctors told his parents, Chester and Jennifer, that he would have a shortened life span because most children with Sanfilippo Syndrome live only 14 or 15 years at most. Often children with the condition are left in a vegetative state by age 7 or 8.

Lucas has been featured in many Daily Times articles over the years, some of which mentioned his service dog, Juno. The Hembree family rescued Juno, a Belgian Malinois, from an animal shelter in Johnson City, hours before she was scheduled to be euthanized.

Unfortunately, Juno passed away unexpectedly in December 2019 at the estimated age of 14. The family had Juno cremated and plan to lay her to rest with Lucas.

Lucas’ journey brought awareness to Sanfilippo Syndrome through social media at the Facebook page Lucas Hembree “Prayers for Lucas.” He also gained a significant following online. For his 13th birthday on March 2, 2020, Lucas received more than 14,000 birthday cards in the mail from Facebook followers, as well as the local community.

The funeral services for Hembree will be held at 7 p.m. Friday, May 1, at Memorial Funeral Home, 1102 Big Springs Road, Maryville.

The family will receive friends from 4-7 p.m. that day. A graveside service will be held at 1 p.m. on May 2 at Brantley’s Chapel Primitive Baptist Church, McCall Road, Maryville.

The family invites the public to line the street on East Broadway Avenue, starting at the Maryville Municipal Building and going to the East Lincoln Road turnoff in Alcoa, starting at 12:15 p.m. Saturday, May 2.

The family requests that participants wear or display something purple in honor of Lucas.

The funeral service will be livestreamed on Facebook (facebook.com/prayingforlucas) for those who cannot make it to the funeral home.