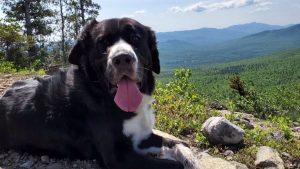 A dog born in March of 2017 is now the subject of two children’s books written by a school teacher who calls the Adirondacks a home away from home. Our Scott Fleishman spoke with the author in Lake Placid and learns how her imperfect pup, Phil, became her storytelling subject.

We first met Sue Steinhardt and her dog, Phil, over the summer at the Ausable Brewing Company. Back in November, Sue released her second book based on Phil. It’s available at the Bookstore Plus in Lake Placid.

I had the chance to speak with Sue via Zoom. She has a retirement home in the Adirondacks. She has been coming here for 25 years and will eventually move to that home full time. But for now, she’s teaching school in New Jersey.

Reporter Scott Fleishman: Sue, here we are in your second book out in November, let’s go back to the beginning.

Sue Steinhardt: When we first got him, we would take him out for walks and we would get within about 20 yards of the car, regardless of where we were. And so it would stop. He would just lay down, locked up and he would refuse to get in the car. So I kept taking videos and pictures of it, and I would share them with my friends. And they kept saying, you have to write a story about this. You have to write a story about this. So it became a blog and the blog became a story. And the first story became a second story. And like you said, now we’re in one, two a series.

Scott Fleishman: What was it about Phil? Because you tell stories on your blog about how people just flocked to him.

Sue Steinhardt: He just attracted people. People love him. He looks harmless. He’s huge. He just makes people at ease. He comes into my classroom and kids who have been afraid of dogs their whole life by the end of the school day will walk up and hug him. And they’re just not afraid of him.

Scott Fleishman: You’re an English teacher in New Jersey. So I’m sure writing comes second nature to you. Did you ever think that this is the path that would go down?

Sue Steinhardt: I’ve always wanted to write a book. I believe my parents have thought I would write a book since I was probably a year old, but I never had a character. I’m not an exciting person. No one wants to hear a story about me. And when I got Phil and I saw the way people reacted to him and I would watch him on our walks and he truly does all the things we tell our stories, he just became the voice that I had been looking for this whole time.

Scott Fleishman: Your first book, “Phillip T. Basher is Imperfectphil” and “Imperfectphil is Who I Am!” What are they about?

Sue Steinhardt: These books are based entirely on a true story. We wanted Phil to be a therapy dog. So we took him to therapy dogs in school. We finally reached the final test and he was just doing this thing exactly as it says in the story. And one of the other women in class really did say it loud. He is absolutely perfect. So I’m perfect. Just morphed into imperfect. And he became imperfect though. The new book is about accepting who you are and everywhere we go, people want to know what Phil is. His mom was a St. Bernard and his dad was a mastiff, but he doesn’t look like another dog. He doesn’t look like a Newfie. He doesn’t look like a St. Bernard. Everywhere we go, people say, well, what is he? So again, true story. We kind of took this idea of looking up the characteristics of what his two breeds are realizing that he’s not really either one of them, which translated into this story about a lot of times what kids hear and what hear people say about them isn’t true. And we live in this world of always being on social media. And what other people say about you isn’t necessarily who you are. So again, Phil’s story became a real-life lesson.

Having her books in a local store means a heck of a lot to this budding author.

When Sue wrote her first book based on Phil, she went to the Bookstore Plus in Lake Placid to see if they would want to sell it. And yes, they liked the concept. Now, they not only sell her first book but the second book in the ImperfectPhil series.

“The Adirondacks has been our dream destination for over 25 years. And as we get closer to retirement and coming up there, as an English teacher, I love books. I love independent bookstores. We are in there, every opportunity that we get. So it was really the opportunity to take that next step from, from online selling to a place where people could touch the books and feel the books. And that’s just what it’s all about,” Sue said.

Imperfectphil not only has books, but he has his own clothing line!