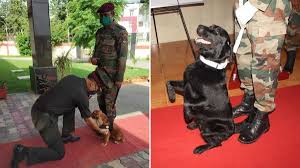 A pair of army dogs, honoured with the army chief’s commendation card on Independence Day for their heroics, found a special mention in Prime Minister Narendra Modi’s Mann Ki Baat address on Sunday, with the PM hailing them as “bravehearts” who performed their duties diligently to protect the country.

While Vida, a black Labrador, sniffed out landmines and grenades during a de-mining operation in Jammu and Kashmir and prevented army casualties; Sophie, a Cocker Spaniel from a bomb disposal unit, helped avert a tragedy by detecting explosives in Delhi, two army officials said. Their names and unique service numbers will be put up on roll-of-honour boards at their respective units.

Army dogs have contributed to a raft of successful operations during the last one year — they helped recover 30 improvised explosive devices (IEDs), played a key role in tracking and locating five terrorists who were later eliminated and facilitated the recovery of soldiers stuck in avalanches, the officials said.

“Our armed forces and security forces have many such brave dogs, who not only live for the country but also sacrifice themselves for the country. Such canines have played a very important role in thwarting numerous bomb blasts and terrorist conspiracies,” the PM said his in his monthly radio address, referring to the outstanding contribution of dogs to military service alongside soldiers.

Five Labradors were awarded commendation cards on Army Day 2020 for helping soldiers track down terrorists in Jammu and Kashmir and sniffing out deadly explosives in the North-east last year. The army has more than 1,000 dogs trained for a variety of roles such as detecting mines and explosives, tracking, assault, infantry patrol, and search and rescue.

“Army dogs and their handlers perform dangerous tasks but they receive little attention. Many of them have been killed in the combat zone. The PM has thrust them into the limelight by highlighting their contribution in his address,” said a senior army officer, asking not to be named.

Mansi, a Labrador, was posthumously “mentioned in dispatches” (the highest honour that a dog can get in military service in India) four years ago for her role in a counter-infiltration operation in north Kashmir. Her handler, Bashir Ahmed War, was posthumously awarded Sena Medal for gallantry.

The army’s Remount and Veterinary Corps (RVC) pioneered war dog training in India in the late 1950s. “RVC trained dogs are in demand in countries such as Bangladesh, Myanmar and Cambodia. Also, South Africa, Nepal, Sri Lanka and Seychelles are getting their dog handlers trained in India,” the officials said.

In his address, the PM also talked about the gallant actions of Balaram, who detected explosives on the Amarnath Yatra route and Bhavana, who sniffed out an IED many years ago but was killed as terrorists managed to trigger the explosive.

“Two or three years ago in Bijapur, Chattisgarh, a sniffer dog Cracker of the CRPF also attained martyrdom in an IED blast. You might have seen a very moving scene on TV a few days ago in which the Beed Police were giving their canine colleague Rocky a final farewell with all due respect. Rocky had helped the police in solving over 300 cases,” the PM said. The PM said indigenous dog breeds such Mudhol Hound, Himachali Hound, Rajapalayam, Kanni, Chippiparai and Kombai were “fabulous,” cheaper to raise and better adapted to the Indian environment. He said the security forces were increasingly inducting these local breeds. The PM said, “The next time you think of raising a pet dog, consider bringing home one of these Indian breeds. At a time when Atmanirbhar Bharat is becoming a mantra of the people, how can any domain be left untouched by its influence?”