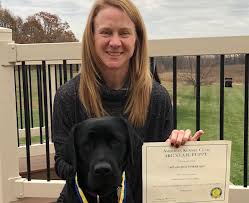 When Streetsboro Middle School students return to their building in the fall, they could be greeted by a black Labrador retriever named Piper.

On Thursday, the Board of Education took another step toward allowing therapy dogs in Streetsboro buildings by unanimously approving a policy that outlines the rules about having a therapy animal on school grounds and provides a mechanism to remove any therapy dogs.

“This is the first step and it just allows it to happen. Remember that for a therapy dog to be accepted, it has to have my approval and certification. So this is just allowing us to move forward. There are still several steps to achieve prior to a therapy dog coming into district,” Superintendent Michael Daulbaugh said.

While the policy is for therapy animals in general, its creation is in direct response to Piper, a therapy dog in training owned by middle school counselor Monica Holzapfel.

In January, Holzapfel told the board about the benefits of therapy dogs and addressed common concerns about therapy dogs in schools. The board then gave her an unofficial nod to continue training Piper to become a school therapy dog.

“One thing Monica said on her own was that she would assess whether the dog was ready and assured me that there were steps to take the dog through certifications and if they’re not met, this won’t happen. That tells me she’s driven and realistic. Therapy dogs are becoming more and more popular in schools because of their benefits. Monica will monitor this every step of the way and if it’s not right, she’ll pull the plug,” Daulbaugh told the board in January.

In an email on Thurday, Holzapfel said that Piper is meeting her benchmarks and that they are working with a trainer to continue to improve her skills.

“While we have not yet undergone an evaluation to become a therapy dog team, I am hopeful that we will be ready for that evaluation by fall of this year. The current restrictions due to COVID-19, if they continue much longer, could delay our progress some because we are not permitted to meet with the trainer in person at this point; it has also made it much more difficult to expose her to different situations that would help prepare her for the school environment,” Holzapfel wrote.

Holzapfel had been bringing Piper to events with large crowds and had received board permission to bring Piper to the building when students weren’t in the building. Both of those activities were intended to help acclimate Piper to the school environment, and neither can be completed due to coronavirus-related restrictions.