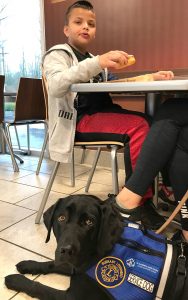 A Maple Ridge family signed up for the Woof-a-Thon virtual challenge, all because of the positive impacts an autism service dog has had on their teenage son.

The recent fundraising challenge was created by BC & Alberta Guide Dogs, to raise needed money towards providing guide, autism service, and PTSD service dogs to individuals in need. And taking their efforts online due to COVID-19, the recent week-long drive raised approximately $26,000 for the cause.

Kai Chand and Rosie helped raised $100 of that. Kai is a 13-year-old boy who was diagnosed with autism when he was two years old. And Rosie is a black Labrador retriever and autism service dog that has been partnered with Kai.

Even though Kai now has his own autism service dog, the funds he and others raised recently will go towards ensuring other families like his have access to these highly trained service dogs.

Kai’s mom, Tara Allen, knew something wasn’t right when Kai was one and a half years old.

Her motherly instinct led her to make a visit to the doctor’s office.

She took her son to the doctor multiple times with concerns, but the physician reassured her everything was fine.

Wanting a second opinion, Allen took Kai to a pediatrician, who was quick to diagnose him with autism.

The diagnosis was a very important step for Allen and Kai, because it meant her son was eligible for the therapy he needed. But after the diagnosis, Allen needed to obtain an official medical document confirming so, which resulted in a one-year waitlist.

“We were told at one point he may never talk,” recounted Allen. But he proved them wrong.

From preschool, Kai received intense therapy – 30 hours a week. Once he went into Kindergarten, his therapy hours reduced – because funding for therapy decreases once a child is around five to six years old.

It was about that time that Allen was attending an autism walk and first discovered a pamphlet containing information about autism service dogs.

“I just thought the benefits of having an animal would be so good for him [Kai], so I signed him up,” explained his mother.

The process to obtain an autism service dog took years for the family, not to mention a hefty amount of paperwork to fill out – including accessing all of Kai’s medical records and autism diagnosis.

But the wait, Mom said, paid off.

Service dogs are selected and matched with their families depending on the child’s personality, the type of home, and the client’s needs, Allen expained.

The Maple Ridge family was matched with Rosie, and she’s been an invaluable asset to Kai.

Autism service dogs differ from regular companion dogs, because they are specially trained to service their host, Mom explained.

When she is out in public with her son, Allen will always bring Rosie along because the dog keeps Kai calm and prevents him from wandering off alone.

Some of the challenges Kai faces are certain noises and sounds that can trigger him, but Rosie is always alert, on duty, and ready to help.

“Rosie opens people’s eyes because Kai doesn’t look like he has autism, he just looks like a bratty child,” said Allen, noting that judgments and uneducated comments from strangers are not an uncommon in their daily life.

“People think he is a very rude teenage boy when, in fact, he’s sometimes struggling with that on outings…” said Allen. “Some people make remarks to Kai when he fails to make eye contact, or his speech is not what they perceive as normal or expected.”

When negative comments are directed at Allen and Kai, depending on the circumstances, Mom shares her son’s diagnosis – not as an excuse, but to help educate others.

“He knows he has autism, he knows he’s a little bit different, so we try to find a way to help support him,” said Allen, noting that when her son is having really bad days, he relies on Rosie for emotional support.

Knowing how much of an asset Rosie has been to Kai, Allen said they are anxious to help out – as best they could– by taking part in the recent Woof-a-thon. And similarly, they’ll be quick to sign up for other fundraisers in future that can help ensure canines companions like Rosie can be there to help other kids, like Kai.