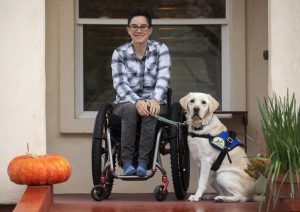 Wallis Brozman’s service dog Renata is always ready to work: to pick up items that Brozman drops, to help pull her wheelchair and in general, to stay attentive to her needs in any situation.

“I could probably find ways to do some of the things Renata helps me with,” Brozman said. “But she allows me to do those activities safely and with a lot more dignity.”

But Brozman also knows what can disrupt Renata’s ability to work. In her own experience, encountering animals with less training and socialization in public places has often been most problematic.

That’s why a new rule change from the U.S. Department of Transportation that will likely curb the number of animals allowed in the cabins of commercial airline flights brought Brozman a sense of relief.

“It was a weight off my shoulders,” she said. “It’s a game-changer.”

The new rule, which takes effect Jan. 1, allows airlines for the first time to treat emotional support animals accompanying passengers the same way as ordinary pets. It draws a distinction between certified service animals, like Brozman’s highly-trained Labrador retriever, and emotional support animals, which are generally not trained. While airlines are still required to fly service dogs for free, they will now be allowed charge fees to transport emotional support animals, as they do already for pets. The fee to bring a pet aboard a plane can range from $95 on Southwest, $100 on Alaska Air and $125 on United, American and Delta.

The goals of the rule change are to help curb unsafe and unsanitary conditions caused by animals that are unprepared for air travel, according to the text of the published rule. The agency also hopes to disincentivize fraudulent use of emotional support and service animals by allowing airlines to charge money to transport support animals and to check the certification of service animals.

“The Department sought … to propose a rule that would ensure passengers with disabilities can continue traveling with service animals in air transportation while also reducing the likelihood that there would be safety or health issues at the airport or onboard aircraft,” the rule read.

The changes are cheered by Canine Companions for Independence, a Santa Rosa-based nonprofit that trains and matches between 300 and 400 service dogs annually with people with a wide range of physical and mental disabilities.

The organization, which employs Brozman and connected her with Renata and two previous service dogs, urged the DOT this year to differentiate between trained service dogs and untrained support animals in the Air Carrier Access Act. Members said the issue is about equitable access, and ensuring that people with disabilities are able to both rely on their service dogs and keep them safe in an airplane cabin.

“I don’t think people understand when their animal lunges at a service dog or does something inappropriate and makes it difficult for that service dog, it’s basically a $50,000 piece of medical equipment you’re disabling,” said Paige Mazzoni, CEO of the nonprofit, which manages a nationwide network of dog trainers raising animals to assist with a wide variety of needs.

The number of comments received on the proposed change indicate the level of interest in the subject. The DOT received more than 15,000 comments this year on the proposed rule change from disability rights advocacy organizations, airlines, airports, transportation worker associations, animal health and training organizations and others, it said.

The interest likely corresponds to the growing prevalence of emotional support animals on flights. Well beyond dogs, those animals can include a wide range of species, including birds and pigs.

Brozman recalled taking a flight in 2010, accompanied by three other people with service dogs. The flight attendant assisting passengers with boarding told them she wasn’t sure if the flight crew could handle four service dogs at the same time.

Less than a decade later, boarding a flight in 2018, Brozman said, she and her dog, Mork, navigated a terminal with 12 dogs in it, including two that lunged at him. At the gate, a flight attendant told her she was in luck — only four other dogs would share the cabin with them.

“The attitude and numbers were so drastically different from eight years prior,“ she said.

As the number of emotional support animals traveling in airplanes has increased, the department noted that dangerous and unsanitary conditions have resulted.

“Airlines and other passengers have also reported increased incidence of misbehavior by ESAs on aircraft and in the airport. The misbehavior has included animals’ urinating, defecating, and in some instances, harming people and other animals at the airport or on the aircraft,” the department said.

While service dogs undergo rigorous training, either by an accredited program or private trainer, emotional support animals are not trained to do work. Instead, medical professionals prescribe those animals to serve as a comforting presence for people experiencing a wide variety of mental or emotional disabilities.

“They provide many benefits,” Brozman said. “But they’re not performing any specific tasks.”

Still, about a third of the comments to the Department of Transportation advocated against allowing airlines to charge for emotional support animals, saying it puts undue burden on people with mental and emotional disabilities to pay for an accommodation that is essential for their travel.

Some health professionals stated that the rule “appears to have a disproportionately negative impact on individuals with mental disabilities, in comparison to those with physical disabilities,” the department said.

Accredited organizations such as Canine Companions train some service dogs to help with certain mental disabilities, such as post traumatic stress disorder. But many people experiencing PTSD, autism, or other conditions use emotional support animals instead.

The organizations also train their dogs to continue working amid the stimuli and stressors of a wide variety of environments — including the crowded, cramped space of airplane cabins.

“If they’re out in public with a dog that comes at them and attack them, they won’t necessarily fight back,” Mazzoni said. Afterward, though, “it can make them skittish, distracted, so if they see other dogs, they will watch them instead of their person.”

Brozman had to retire one of her previous service dogs Mork from his job early after he was attacked by a few aggressive dogs and was unable to perform his duties as needed afterward.

“I went to flying around the country for work with Mork to being terrified to leave my house alone because I felt unsafe,” she said. “It crippled my independence in ways I couldn’t have predicted. … I’m still fearful of unknown dogs. Renata does help me through that, though.”

For the rest of the year, emotional support animals will continue to fly as service animals. By January, however, airlines may roll out new policies.

Jon Stout, manager of the Charles M. Schultz-Sonoma County Airport, said it’s not yet clear how local flights might be impacted. Alaska and American Airlines, which both service the Sonoma County airport, have not yet publicized any policy changes in response to the new rule.

“We’re kind of on the sidelines on this,” he said.

Mazzoni said she was grateful to have seen the efforts of airlines to provide more equitable services for people with disabilities. The changes made possible under the new rule will make an important impact, she said.

“The airlines have a very hard job, and a lot of them have really stepped up and tried to make this work,” Mazzoni said.