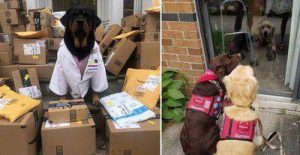 The American Kennel Club, the world’s largest purebred dog registry and leading advocate for dogs, is proud to honor ‘Dogtor’ Loki and the Go Team Therapy Dogs with the AKC Paw of Courage awards. The AKC Paw of Courage shows appreciation for the work that dogs do in the service of humankind. These awards recognize dogs who serve their communities, making great impacts in the lives of their human counterparts.

‘Dogtor’ Loki, a two-year-old Rottweiler, is a therapy dog owned by Caroline Benzel, a medical student at the University of Maryland School of Medicine. Loki is delivering care packages and smiles in an effort to give back to medical professionals working on the front lines in the battle against the COVID-19 pandemic. When the COVID-19 outbreak put a halt to in-person therapy visits, Caroline and Dogtor Loki took to their electronic devices to continue their therapy work virtually.

During the virtual visits, Caroline noticed the doctors and nurses being irritated from the constant use of the personal protective equipment and knew she had to do something. She began putting together care packages, which she calls “hero healing kits,” and delivering them to front-line workers with Loki’s help. The dynamic duo has personally delivered more than 5,500 kits and the campaign has taken off nationally, with similar projects started in eight other states. Through generous donations, Caroline and Loki have raised more than $80,000 for the kits, personal protective equipment, food and supplies for frontline workers.

The GO TEAM is an active group of 600+ handler/therapy dog teams working across the United States and Italy. These teams have volunteered with first responders and firefighters during times of crisis including shootings, suicides, floods, fires, and major disasters among other catastrophic events. Teams have also made special visits to countless schools, colleges, hospices, hospitals, and other special events.

During the COVID-19 outbreak, many of the teams around the country had to make changes to their normal routine. Several therapy teams paired up with teachers to do virtual Paws2Read sessions, and many began virtual therapy visits with their patients. Some have also participated in drive-by visits to assisted living homes, fire departments, graduations, birthdays and more. The Go Team therapy dogs have given out hundreds of trading cards which include photos and information of each dog on them and many are actively putting together care packages with essential items to deliver to seniors who may be unable to get out of their houses. As the country is slowly opening, the Go Team is following the city regulated COVID guidelines to plan their future visits. During this trying time, the Go Team therapy dogs have been bringing comfort and relief to people throughout the United States and beyond.

“We are thrilled to honor ‘Dogtor’ Loki and the Go Team Therapy Dogs with the AKC Paw of Courage awards,” said AKC Executive Secretary Gina DiNardo. “These canine heroes are bringing comfort and smiles during tumultuous times and these awards give us a chance to recognize the important work they are doing.”

Other 2020 Paw of Courage recipients included Jackson, an eight-year-old Golden Retriever owned by Bob Wharton, Molly, a ten-year-old Vizsla owned by Connie Priesz, and Phoebe a 10-year-old Belgian Tervuren owned by Dr. Pamela Regan. These therapy dogs have all adjusted to the changing times due to the global pandemic and continue their important work to comfort those in need.

Any dog is eligible to receive an AKC Paw of Courage; the award is not specific to purebred dogs. Paw of Courage awards can be presented to Police K-9s, Military Working Dogs, Therapy Dogs, Service Dogs and other canines that work to make the lives of the people around them safer, easier or just simply happier.