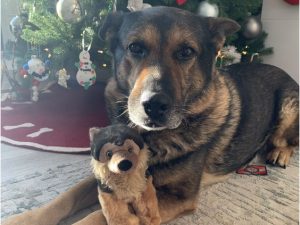 Come January, Police Service Dog Nixon will be ready to put his paws up and enjoy retirement.

While the retirement is well-deserved for the now-10-year-old dog, Canine Unit Const. Derrick Fox will transition from handler/partner to owner. That means veterinary bills once paid by the Regina Police Service will now fall to Fox to foot.

“The amount of work that these dogs are put to, the end of their life is when they start seeing the joint pain or hip damage and stuff like that,” Fox said. “It can be expensive with medication, so that’s where the SPCA steps in.”

The Saskatchewan Society for the Prevention of Cruelty to Animals (SPCA) launched the Stryker K-9 Care Fund in 2015, said program director Sandra Anderson.

“When law enforcement dogs retire, they generally don’t have any sort of support from the agency that they worked for, so the owner of the animal is responsible for all costs at that point,” she said. “These dogs have worked really hard throughout their careers and they may require surgeries related to the intense workload that they’ve had while serving the police force.” She added that medical conditions can crop up as dogs age, which also require care.

Fox said German Shepherds like Nixon commonly develop hip and back issues over time — something that is exacerbated by the nature of the work they do when serving as PSDs.

“Most of it, it’s repetitive strain,” he said. “Jumping in and out of the truck, it’s something very unnatural for them … They land on their shoulders quite frequently or they jump over fences and they’re landing and jarring their shoulders. So over time, over the seven or eight years the dog works in the unit, that arthritis builds up.”

In Nixon’s case, he’s already had to have surgery on his back legs so he currently works as a drug dog, keeping him from having to do demanding physical work. (Fox has a second, younger dog for those duties.) Nixon is on a muscle relaxant to help him walk, so Fox knows he will need the fund going forward for things like the vet mobility clinic they use. Other bills include things like yearly physicals and dental work, he said.

Anderson said since the Stryker fund’s inception, it’s given out just shy of $25,000 to 21 retired dogs belonging to various Saskatchewan police services — mainly in Regina and Saskatoon — and the Canada Border Services Agency. Funding is provided for things like yearly physicals, medications, dietary supplements recommended by vets and surgeries deemed medically necessary. Money is also used to pay for euthanizing and cremating dogs when the time comes. Anderson and Fox pointed out the fund isn’t usually enough to cover off the entire bill, but rather helps out with the overall cost.

Police services fundraise to ensure there’s enough in the fund when it’s needed. Both Saskatoon and Regina police have often done calendars featuring the dogs on their respective units, but Fox said Regina police changed things up this year. This time, they’re selling stuffed dogs with all money raised going to the Stryker fund.

Fox said the stuffies were already on hand at the RPS, usually given out to kids police encounter during their work to comfort or make them feel better.