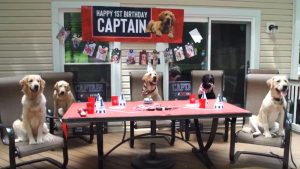 The Washington Capitals’ service dog in training turned one year old on Wednesday and had a big bash with some of his friends.

Captain, who came from America’s VetDogs, a New York-based nonprofit that trains and provides service dogs to veterans and first responders with disabilities, joined the Capitals in October.

He made his big debut being carried down the red carpet by forward Alex Ovechkin and soon after became a social media star with more than 84,000 followers on Instagram and 48,000 on Twitter.

Captain’s social media feeds are filled with costumed capers and snuggles with Capitals players. He was also voted Best Team Dog in the 2020 NHL Fan Choice Awards. For his birthday party, Captain got a party hat, some decorations, a birthday cake chew toy and a cup of kibble. If this is what the dog days of summer bring, sign us up.