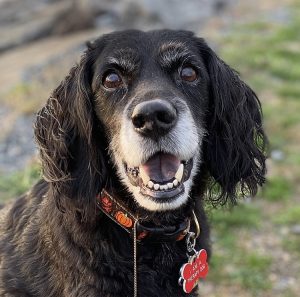 We found Diego through a Petfinder. We began our search soon after the loss of our beloved cocker spaniel Doogie. Diego was rescued with his mother as a puppy from a rural Alabama animal shelter.

Diego’s mom had been shot with buckshot, but continued to care for and protect Diego before being rescued. His mom was adopted by his rescue foster mom, and we happily adopted him after his rescue group transported him up to the northeast.

We named him after the character “Diego” in Dora the Explorer because that character saves animals, and our Diego was a rescue.

Diego was found to have a serious congenital defect shortly after adoption and needed to undergo a $10,000 operation to save his life! Diego also lived with us through Superstorm Sandy, shortly after which he tore BOTH of his ACL’s and required further surgeries. But throughout all his life challenges, he was always smiling!

He became a certified Bright and Beautiful Therapy Dog and helped found a groundbreaking local therapy dog visitation program for homebound seniors called Caregiver Canines. Diego was the very first Caregiver Canine. Diego brought smiles to the faces of people of all ages while working as a therapy dog for over ten years and he LOVED his therapy dog work!

Sadly, Diego passed away in January of this year.