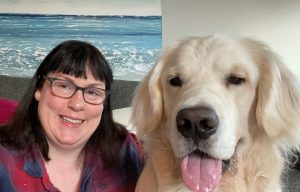 Casper, the aptly-named friendly therapy dog, is helping distribute 10,000 meals to frontline medical workers who are protecting communities in Seattle and beyond during the current coronavirus pandemic.

The golden retriever and his guardian, Rachel Elliot, are giving back to heroic doctors, nurses and hospital staff with the aid of non-profit organization Fueling The Fearless, which partners with struggling restaurants to prepare and distribute healthy meals to those most in need.

It’s not just the meals people are after; Casper’s friendly personality is proving to be quite a hot commodity.

“I’m still getting texts from people that we visited at Swedish,” Elliott said. “Like, ‘Can you come back? We’d like to see you.’ They’re not talking about the food. It’s the connection, like, ‘I see you, I hear you, I’m here for you and, you know, you can pet a dog’ kind of thing.”

Elliott adopted four-year-old Casper when he was just eight weeks old, and she believes he was born to help.

“Any dog, any breed can become a therapy dog,” Elliott continued. “It’s more of the personality, obedience, things like that. That’s what’s great about therapy dogs. You can’t train a personality. He is who he is. He really knows his surroundings and what’s going on. It’s also getting them used to different surroundings. So right now with COVID, everyone’s wearing a mask. It doesn’t faze Casper at all.”

Thank you, Casper and Rachel, for giving your time and positive energy back to the community.