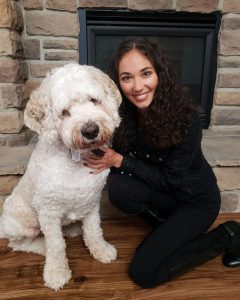 Some of Brooke Young’s fondest childhood memories were formed in an unexpected place — a local nursing home.

At Oak Grove Manor, Young learned the value of serving others, bringing joy and forming relationships that span generations.

Now an adult, she hopes to pass on those values to the next generation of children through a heartfelt retelling of her precious memories. Young recently authored a children’s picture book called Murray’s Miraculous Mission. The book tells the story of a young girl who visits nursing homes with her therapy dog, bringing cheer to the residents and making new friends along the way.

The book is inspired by Young’s experiences visiting Oak Grove with her grandfather Larry Volz and a sweet, loving golden retriever named Molly.

“I was so compelled to write this story because I was able to experience multigenerational relationships at such a young age,” she said. “I was also able to learn at a very young age about the joy that comes from volunteering and serving your community.”

Young began writing her book earlier this year. Condensing the most meaningful moments into a 26-page children’s book was challenging.

“I went through this project during the quarantine time many, many times,” she said. “I’ve edited this thousand words, thousands of times.”

After writing, rewriting, polishing and editing, Young took her final product to a Halo Publishing, who connected her with illustrator Chad Thompson. Thompson has done illustrations for numerous children’s books and worked for Walt Disney Feature Animation studios.

“He brought my visions to life in the most beautiful, vibrant, compelling way that I could have imagined and I cannot thank him enough for being willing to do this,” Young said.

Young’s interest in therapy dogs took root when she was nine years old. She and her grandfather read a newspaper article about an increased need for therapy animals, which inspired them to spend an entire summer training the family pet.

“Neither of us knew anything about it, but knew that she was a loving dog and that it was a great way to spend time together,” Young said.

After months of working with Molly, the trio finally began visiting local nursing homes. Their favorite and most frequent stop was Oak Grove.

Helen Coleman, the activities director at Oak Grove Manor, said the residents looked forward to the group’s weekly visits. Some residents had pictures of Young and Molly on their refrigerators. Others kept dog treats in their rooms.

“The residents would get a kick out of Molly going in and going straight to the treat box,” she said.

Young, Volz and Molly went to Oak Grove on a regular basis for the next four or five years, until Molly passed away. During that time, Young developed a passion for therapy dogs, but also for volunteering and spending time with the elderly.

“I was able to expand my mind in a way that traditional friendships with only your peers does not allow. You can learn so much about topics that you may never have discussed with friends your age,” Young said. “Once you learn about the hardships, the struggles, the triumphs, the joys of someone else when you are so young, I feel that it opens your mind to the possibilities.”

While Murray’s Miraculous Mission is primarily based on Young’s experiences, there are two key differences.

In the book, the title character is a St. Bernard Poodle named Murray, modeled after Young’s current pet. Young made the switch in hopes that her pooch can make an appearance during virtual or in-person reading sessions with kids.

“All the stories are based on Molly, they show pictures of Murray, just because he’s really cute and he wants to say hi to people on Zoom,” Young said.

Young also decided not to create a character based on her grandfather. Volz passed away two years ago — something she doesn’t want to have to explain to young readers.

Although he doesn’t appear as a character in the story, Young dedicated the book to her grandfather in an author’s note.

“I’ve been wanting to do this since my grandpa passed away. It was something that I was very compelled to share just because those memories were such a huge part of my childhood,” she said. “He took initiative to take me, and he made it a priority in his life and by doing that, he showed me that serving others needed to be a priority in my life as well.”

Her grandmother, Tina Volz, said she teared up when she saw the dedication.

“They always looked forward to going together,” she said. “He was always ready to go. He dropped whatever he had going on when she wanted to go and they went.”

Young hopes the book will inspire young people to make a difference in whatever way they can.

She also hopes to raise public awareness about the role of therapy dogs.

There are some children’s books out there about service dogs, Young said, but stories about therapy dogs are rare.

Seeing-eye dogs, seizure-response dogs and emotional-support dogs are all examples of service animals.

“Therapy dogs are not trained as intensively, but they are trained to help people in environments where people need emotional support. So places like hospitals, nursing homes, cancer centers, hospice, assisted living — all of these places employ therapy dogs, because they help provide emotional support, comfort and meaningful relationships,” Young explained.

Some studies have shown that time with a therapy dog can lower blood pressure and improve mental health.

Coleman said she hopes to welcome therapy animals back to Oak Grove as soon as public health conditions allow.

“Brooke, Molly and other volunteers become part of the family. I so much miss my volunteers,” Coleman said.

Animals that are calm, friendly and not startled by sudden noises or movements are the best fit.

“I definitely welcome volunteers of any type, but especially pets. You can’t get a better combination, pets and kids,” Coleman said.