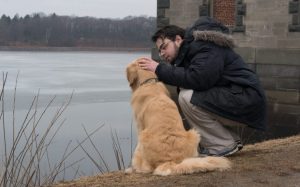 As the Chinese economy has grown into the second largest in the world, the country lags far behind in another marker – the availability of guide dogs for the blind.

There are less than 300 guide dogs in China for 17,300,000 visually-impaired people, leaving less than 0.001% of people with access to a guide dog, according to the Zhengzhou Love Guide Dog Service Center, a guide dog training school.

This compares to the United States where the Centers for Disease Control and Prevention estimates there are 1.02 million blind people. According to Guiding Eyes for the Blind there are about 10,000 guide dogs for the blind. That means about 1% blind people have guide dogs – 1000 times the ratio of China.

Other places have varying rates:

The United Kingdom. The Guide Dogs for the Blind Association says there are currently 5,000 active guide dogs for 2 million living with sight loss – a rate of 0.25%.
Germany. According to a recent article in Die Zeit’s there are 180,000 blind people in Germany, and 2,700 guide dogs in service, meaning the 1.5 percent of the blind have guide dogs.
Japan has 909 guide dogs with 320,000 registered blind people as of 2020, according to The Japan Guide Dog Association. That means 0.28% of blind people own a guide dog.
Taiwan. Data from the Directorate General of Budget, Accounting, and Statistics of Taiwan shows Taiwan has less than 50 guide dogs for 60,000 visually impaired people as of 2013, leaving 0.08% with access to a guide dog.
Asia is steps behind the western world in guide dog training. According to the International Guide Dog Federation (I.G.D.F.), only five countries and regions have I.G.D.F. accredited members, including Mainland China, Hong Kong, Taiwan, Japan, and South Korea.

Guide dogs are not yet widely accepted in China, despite a rapid increase in people owning pets. According to Frost & Sullivan, a market research company, pet owners represented 16% of china’s population in 2013. By 2018 it was up to 22%.

Yet some people find guide dogs unacceptable in public places.

On April 26, a traffic police officer in Taiyuan, the capital of Shanxi province, tested the system by posing as a blind person. She was barred from boarding a bus even though she told the driver she was blind and needed her guide dog, Taobao.

“People will get rabies from dog bites. Are you leaving or not? I’m calling the cops,” said the bus driver after the traffic police officer, still posing as a blind person, explained the law several times and presented the dog’s identity document. She was also scolded by passengers who said she was “wasting their time.”

Taobao’s actual owner, Zhipeng Gao, told the Chinese news outlet “The Paper” that this kind of thing happens almost every day since he got his dog in 2014.

This incident recorded on video soon became the number one trending on the Chinese social media platform Weibo.

China’s Construction of Barrier-Free Environments Regulations enacted in 2012 gave guide dogs legal access to public places. Cities such as Shenzhen, Shanghai, and Guangzhou, have their own regulations granting guide dogs access. But some local governments failed to educate and disseminate this law to its departments and workers, and many people remain unaware of this national law.

Besides the lack of acceptance in society, lack of funding is the main reason for the scarcity of guide dogs in China.

As the biggest verified guide dog training facility, it receives funding from the Chinese government. The other five training centers, such as the Zhengzhou Love Guide Dog Service, rely solely on donations from people and its founders.

The Zhengzhou center was founded in 2009 by Li Guan in the capital of Henan province. The facility has successfully trained seven guide dogs in 11 years, with three dogs still in training. The process of making a guide dog takes time and money; it can take more than two years and cost about 200,000 yuan (around $29,777) per dog, according to Guan.

Guan, an animal lover who got into guide dog training to help disabled people, said her operation is small because relying on donations is unstable, making it difficult to develop sustainably and reliably.

Another guide dog school founded in 2016 in Xi’an by Guowang Zhang also struggles for funding. According to the facility’s official social media account on Weibo, when they first opened, construction costs had drained almost all of their funds. They had to use freight containers as dorms for dog trainers. Without a budget for air conditioning, trainers had to rest in the kennel during summertime when the surface temperature reached 140 degrees (60 Celsius).

They soon faced another dilemma when the government’s forced demolition in 2018 forced the school to relocate. Without money to find a new location to conduct proper training, Zhang said almost all dogs were disqualified and eliminated from the program as they failed to learn certain things.

The Xi’an center restarted dog training and got back on its feet in April when it received donations from the Raising Guide Dogs Online donation program, along with volunteers’ help.

The online donation platform is an income source for four dog schools in China, including both schools in Xi’an and Zhengzhou. This online platform presents profiles on each dog in training. People can choose to “raise” a dog of their choice virtually by donating and receiving updates on dogs’ daily lives, performance, and exam grades.

Puppies are sent to a volunteer’s home to learn how to interact and live with humans 60 days after birth. They return to the training center when they are around 12-14 months old to study for 18-24 months and then take their official exam.

A guide dog needs to know how to safely and swiftly lead its owner to avoid obstacles, understand and complete more than 30 commands, lead someone to at least five destinations, and serve as emotional support in the meantime.

Many dogs don’t make it to the graduation.

“They are constantly tested on their ability even before their official exam, and the success rate for dogs to officially become an eye-seeing dog is only around 30%,” said Guan.

More than 700 people are waiting for a guide dog from Zhengzhou Love Guide Dog Service Center. Guan said that with over a million visually-impaired people in Henan province alone, some have waited for more than 10 years.

“People can request a guide dog directly through us or China Disabled Persons’ Federation,” Guan said. “They have to meet some of our requirements before we evaluate their eligibility to see if they can get a guide dog. Then they need to pass our training with a guide dog.”

Those who finally get their turn will be invited to live in the training facility for a month or two and work closely with a guide dog. That’s when a person and a dog learn each other’s personalities, daily habits, and behavioral characteristics. If they don’t match, the person will be placed at the end of the line and wait all over again.

“The dog has to become a part of that person,” Guan said. “Whatever a guide dog can do with their trainer, that person has to be able to do the same.”

Disabled people receive some help from the government, depending on their level of disability, location, and total family income. Take Wenzhou, an industrial city located in southeastern Zhejiang province as an example –  disabled people receive ranging from 125 to 500 yuan (about $17.8 to $71.4) every month, along with grants to help them start their own business and/or go to school, according to the government.

“You have no idea how hard a blind person’s life is. They just stay in the house every day in their little black room, and no one takes care of them. They can’t do anything, and many of them are very depressed,” Guan said.

Being an animal lover since she was a child, Guan taught her dog many skills before she founded her dog training center. When the first guide dog school opened in, she immediately flew there to intern.

“We want to raise guide dogs, so visually-impaired people can go out, live with dignity, and walk like a normal person. The warmth and confidence from a guide dog is not something that a white cane can bring,” she said.

“This career has turned me from rich to broke,” Guan lamented. “I paid for many things myself, but even me investing all my money into this cause is not enough. There’s only so much one can do.”