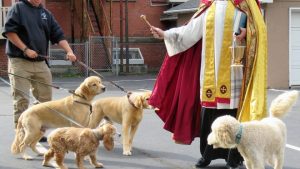 In keeping with current pandemic rules, pet owners wore masks, remained distant, and took part in praying for dogs, cats, turtles, and other pets and animals around the world.

The service was part of the official annual Blessing of the Animals held worldwide Oct. 4. Rev. Matthew C. Newcomb of St. Mary’s, with his own beloved dog, Pius, beside him, conducted the local service in the church parking lot.

“Pets are a great gift from God, to be our helpmates in life. Studies show that those who have animals are happier and healthier,” Newcomb said after the service.

Newcomb said he got Pius for his mother about two years after the family had to put down their last dog, Rouge.

“Rouge was originally my late sister’s dog. A month after Rouge died, my father passed,” Newcomb said. “Pius took to me and has been my faithful companion. He is excellent with people and is a way I can evangelize and meet people, when I walk and jog with him.” Smiling as he watched the interaction among pets, and between pets and their owners, Newcomb led a service with roots dating back to the Middle Ages and the Feast of St. Francis. Both the feast and Blessing of Animals service originated in tribute to animals and in celebration of their love by Italian priest, Giovanni di Pietro di Bernardone of Assisi, Italy nearly 800 years ago. St. Francis of Assisi died on Oct. 3, 1226. His unconditional love and celebration for animals has continued worldwide on or around Oct. 4 annually.

“The animals of God’s creation inhabit the skies, the earth, and the sea. They share in the fortunes of human existence and have a part in human life,” Newcomb said in prayers offered last Sunday. “We therefore invoke the divine blessing on these animals, and as we do so let us praise the Creator and thank him for setting us over other creatures of the earth.”

In attendance were several dozen pets and owners. Most pets were canine or feline, but one couple brought a pet baby turtle – which was born with two heads. Named Jake and Elwood, the couple said they brought this pet to receive blessings for continued good health.

“We believe it will help,” said Tanya Pfaeffle of Milford, Pa., who attended with her husband, Mike. “They are healthy and doing well, and we want them to continue to do so. That’s why we’re here with them today.”