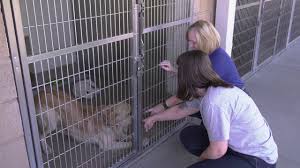 One place in Riverside County where an empty state is cause for applause: an animal shelter.

Riverside County Animal Services shared a sweet scene of empty kennels and smiling staff on Wednesday night, with a post on Facebook announcing, “This is incredible: we cleared the adoptable animals!”

Gavin Newsom ordered seniors and at-risk individuals to stay home during the COVID-19 pandemic. By March 19, all Californians were under orders to stay home unless doing essential work or errands.

In a video on the department’s Facebook page, a woman says she is at the “Riverside animal shelter” (presumably, the department’s Riverside location — one of its four locations in the county) and that it has been completely cleared of adoptable animals. On cue, people in scrubs lined up in front of empty kennels yell and waive their arms in the air in celebration.  “We really continuously need your help, but right now, you have met our pleas, and we are so, so very thankful for all of you for doing right by our community, animals, and because of that we’re empty!” the woman says, with everyone joining in on the last word.