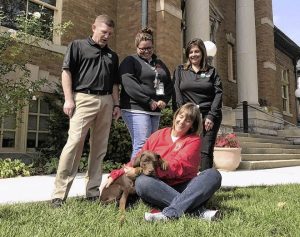 Emergencies and tragedies can have a deep emotional effect on the first responders who do their best to provide help.

“Most people don’t understand the wear and tear that the responders see on a daily basis. It does build up on them and can cause issues,” said Patrick Brandt, director of Delaware County Emergency Communications.

When that occurs, Coco the therapy dog is ready to lend a helpful paw.

Coco, a 1-year-old female Catahoula leopard dog, is based at the county 911 center to provide emotional support to the 911 staff and other first responders, said Karla Jacobs, 911 dispatcher and Coco’s handler.

Coco is funded entirely by donations, Brandt said. No tax dollars are used in connection with the dog.

Emergency crises can have an emotional effect on all first responders, Brandt said.

“Even though the 911 dispatchers are not on scene (of an emergency), it impacts them,” Brandt said. “They’re the first person to get to talk to the person who says their child’s not breathing, there’s been a crash or something. It affects us as well as the responders.”

“Sometimes, from a dispatcher’s standpoint, it can be even harder because they don’t get to see the follow-through with the situation,” he said.

“There’s a little bit of unended situation, particularly with the EMS department,” Brandt said. “They work one day on and two days off. That can be really troubling when they’re on a shift and they see something really bad. And then the next two days they’re at home, without the interaction of their coworkers to work through those scenes.

“Coco has been emotional support for all of us,” he said.

Those who have worked with the dog said she has exceptional capability.

One of the first to notice it was Mike Fite, who operates Come, Sit and Stay Kennel in Ostrander with his wife, Linda.

Fite’s sister-in-law, Kathy Fite, took in Coco as a surrender from previous owners trying to find the 12-week-old dog a home.

That Coco displays such traits, he said, is even more remarkable considering she is a full-blood Catahoula leopard dog.

“I wouldn’t have thought a Catahoula could be so chill,” Fite said. “Most of them are working dogs” who don’t necessarily get along with other dogs, he said, yet Coco fit right in with about 30 other dogs at Come, Sit and Stay.

Mike and Linda Fite are “just really good people and really love dogs, and they deserve so much credit for finding this dog,” Jacobs said.

Coco was 6 months old when she was introduced in March to Jacobs, starting the process leading to her therapy-dog job.

“She was amazing. She’s so friendly and she wants to meet everyone,” Dursey said. “I absolutely fell in love with her.”

She compared Coco’s training at Homestead to a boot camp, learning basic commands, manners and behavior on- and off-leash – “just how to behave when she’s greeting another dog or a person.”

Coco has a knack for knowing when she’s needed, Jacobs said.

During a recent incident, “a dispatcher was on the phone with a cardiac-arrest call and was walking the person through CPR, and Coco went over to her and put her head on her lap when she was walking the caller through CPR instruction,” Jacobs said.

“Somehow, they know,” she said.

One was a serious medical call, she said.

“Law enforcement and everybody were on (a call that) dealt with a child,” she said.

“It had an impact on the first responders,” so Jacobs took Coco to the session.

She said Coco works at the 911 center a couple of days a week.

Otherwise, Coco lives with Jacobs and has made friends with her two cats.

Like all dogs, Coco likes to play and nap, Jacobs said. Other county employees often take her for walks.